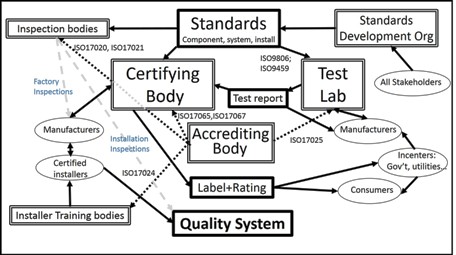 In December 2015, the International Renewable Energy Agency (IRENA) published a comprehensive report on how to establish a quality infrastructure (QI) for solar water heaters on small-scale markets (see the attached document). The 76-page study is part of a series on Quality Infrastructure for Renewable Energy, which uses information from 83 survey respondents and data from interviews with 34 experts on QIs for renewable energy sources. The report discusses established international system and collector testing standards as well as examples of implementation across selected countries. It also highlights market barriers and makes recommendations for developing solar water heater Qis, focusing mainly on emerging markets. The programme highlights the complexity of a quality infrastructure, including the establishment of a product label, test labs, installers’ certification and the involvement of inspection bodies.
Source: IRENA
Just as the report Guide on Standardisation and Quality Assurance for Solar Thermal published by the European Solar Thermal Industry Federation (ESTIF) had done in 2012 (and updated it 2015), the IRENA publication apparently targets policymakers and industry representatives in countries which still display a lack of a comprehensive system for quality assurance. At its core, it is a policy document, but it might serve to give even solar thermal insiders an overview of existing QI schemes in some major and minor markets all over the globe.
Chapters 2 and 3 offer general information on SWH technology and the components of a quality infrastructure for solar thermal. Although this information is nothing new to industry insiders, it might as well help to make a point when trying to convince policymakers actively involved in the sector to provide financing for QI infrastructures. It emphasises the need for product reliability and installer training in order to promote customer confidence in the technology.
Small countries to join regional QI schemes for cost-cutting
The examples of QI introduction from several countries are well worth a read for experts from new emerging markets, despite their rather general level of description. For example is Australia that has adopted testing standards similar to ISO 9806:2013 and ISO 9459-4:2013, but even in a relatively large market this has been the result of a difficult process of “developing accurate testing and modelling”, according to the study. As Australia possesses a rather mature market and much experience, most systems are not being tested individually. Quality is assessed by simulation models, which cuts costs for testing.
In contrast to such well-developed structures, Barbados seems to have established its market “with little concern for quality assurance aspects”, the authors of the study emphasise. On the island, SWHs show a 35 % market penetration in the residential sector thanks to high government incentives in the past – but the market seems to have stalled, as the middle-income target segment is saturated. The lack of a QI infrastructure precludes the local industry from gaining access to neighbouring markets in the Caribbean or Latin America, the study concludes. The Barbados National Standards Institute has signalled its interest in joining a regional QI scheme in order to mitigate costs for the development of an entire QI system on the small island. There are other examples, and they help the reader to understand common problems – like the challenges SWH businesses have to face when it comes to guaranteeing a certain standard.
Five steps for strengthening solar water heater quality assurance
In the final chapter, the IRENA authors introduce a five-step approach to strengthen solar water heater quality assurance. The clear message: “Without significant QI for both hardware and installation, the SWH market can be irrecoverably harmed, as has been observed time and time again.” The report also offers an overview (see Appendix B) of standards, laboratories, certification bodies and accreditation organisations existing in 17 solar thermal markets worldwide, including established markets such as the large ones in China and USA and the smaller ones as in Costa Rica and Argentina.
Those involved in the quality assurance business may not find much new information here. The 2012 ESTIF study offers more tables to help compare standards and provides more technical details. But IRENA managed to summarise and update the information and present it in a clear order. While ESTIF explored if and to what extent European experiences could be applied to emerging markets, IRENA uses case studies from countries at very different levels of development – with the data taken from interviews with market and quality assurance insiders and having been revised by experts like the Australian Ken Guthrie, head of the ISO/TC 180 committee.
This news was written by Vanessa Kriele, a German freelance journalist specialised in renewable energies and world economics.
Organisations mentioned in the article:
http://www.irena.org
http://www.estif.org
https://solarthermalworld.org/wp-content/uploads/2016/01/irena_quality_infrastructure_swh_2015.pdf
https://solarthermalworld.org/wp-content/uploads/2016/01/estif_standardisation_2012.pdf
https://solarthermalworld.org/wp-content/uploads/2016/01/estif_report_measuring_monitoring_control_2015.pdf