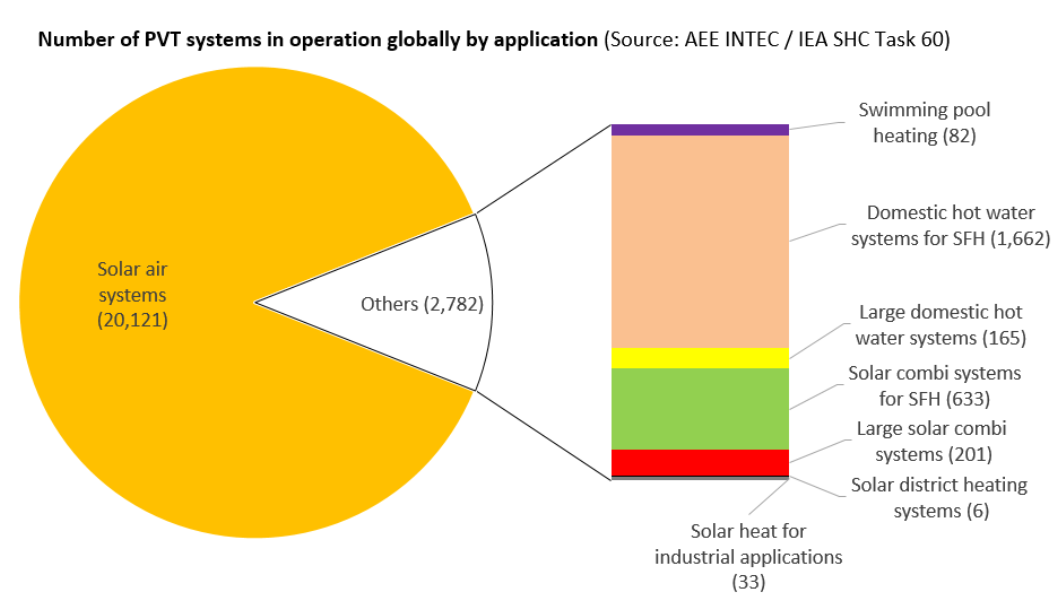 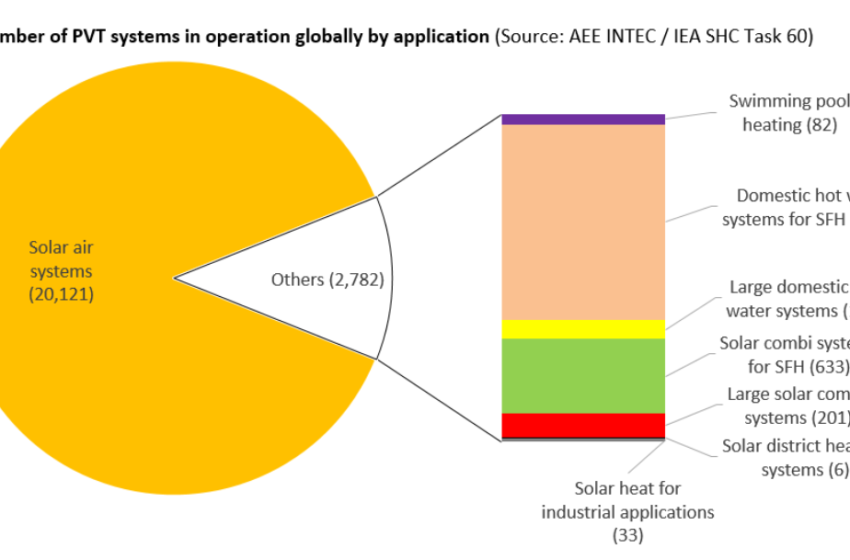 PV-Thermal systems, which generate heat and electricity from the same collector, are gaining ever more traction: For the first time, they have now been included in the Solar Heat Worldwide report. Data supplied by 26 manufacturers from 11 countries indicates that more than 1 million m2 of PVT collector area has been sold globally so far. The above chart shows the number of operational PVT systems, broken down by application. The dominant and driving force in the market are solar air systems. They come mainly from France, where nearly all of them are designed to use air as the heat transfer medium. Manufacturers also said they had sold 1,662 domestic PVT hot water systems.
Source: AEE INTEC / IEA SHC TASK 60
The survey was conducted under the auspices of international research platform Application of PVT collectors, which was set up by the IEA Solar Heating and Cooling programme. “Our aim was to give an overview of PVT systems and solutions available for sale and seek out best practice examples that showcase the most intriguing PVT applications,” Thomas Ramschak, a researcher working at Austrian institute AEE INTEC, said. The institute’s findings are shown in chapter 4.4 (pp. 23 to 29) of Solar Heat Worldwide.
The questionnaire was sent to more than 60 PVT system suppliers. Important manufacturers from all over the world responded, providing their sales figures, according to Ramschak. Still, he believes the survey captured only about half of global sales.
Key PVT markets: France, South Korea, China and Germany
Most manufacturers that participated in the survey – 21 of 26, to be precise – focus on liquid-based PVT collectors. Another three offer solar air collectors and 2 concentrating ones. Among suppliers of liquid-based systems, 12 make collectors without covers, 7 with and one business is using evacuated tubes.

PVT collector area installed in European countries by the end of 2018 (in m2)
Source: AEE INTEC, Task 60
At the end of 2017, the cumulative PVT collector area produced globally by all 26 manufacturers was 1,075,247 m2, with 56 % of the total having been sold in Europe and 44 % on other continents. In Europe, France was leading the market last year, showing 442,504 m2 of installed collector area, followed by Germany, where it was 109,380 m2. And in three other countries, namely Italy, the Netherlands and Switzerland, total sales were between 5,000 m2 and 15,000 m2. As for markets not in Europe, the leading PVT manufacturer in Israel said it had sold 575,000 m2 by the end of 2018, with much of its exports going to Korea, China and Germany.
Organisations mentioned in this article:
http://task60.iea-shc.org/
http://www.aee-intec.at
http://www.iea-shc.org
https://www.iea-shc.org/solar-heat-worldwide