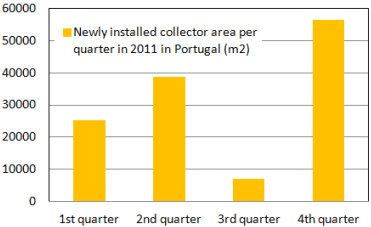 In the last quarter of 2011, the Portuguese solar thermal market has seen a sudden spike in sales, allowing the newly installed collector area per year to surpass 125,000 m² (88 MWth). The surprising development seems to be a result of two tax changes that have taken place at the beginning of this year: Since January 2012, the VAT rate of all renewable energy equipment has been increased by an additional 10%. At the same time, energy prices of fossil fuels have risen as well, because electricity and natural gas have been charged with a VAT rate of 23% since the beginning of this year.
Source: Apisolar

According to estimates by the Portuguese national solar industry association, Apisolar, 2011 ended with 127,198 m² (89 MWth) of newly installed collector area, of which 56,439 m² were installed during the last quarter of the year. “The high demand at the end of the year was probably caused by the increase in VAT from 13% to 23%, or rather the loss of a reduced VAT rate. I am sure that if it were not for the 10% VAT increase, the thousands of families who bought solar thermal in December would not have done it,” Victor Júlio, Apisolar’s Vice President and responsible for the solar thermal market statistics, explains.

The above-mentioned figure exceeded even Apisolar’s highest expectations for 2011. Earlier that year, the association pointed to 120,000 m², a number that had been revised downwards to 90,000 m². “Each quarter, Apisolar carries out surveys on the evolution of the market. By mid-2011, we estimated an area of 120,000 m² for the entire year. But in the third quarter, expectations became very low, which made us change our estimate closer to 90,000 m²,” says Júlio. However, due to the increasing VAT rate, “families reacted and invested in solar thermal – even in a period of economic restraint”.