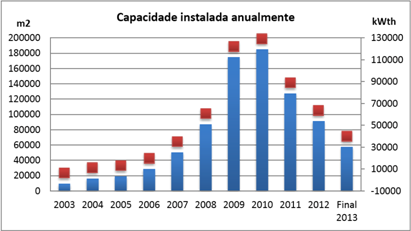 The Portuguese solar thermal industry is still facing a difficult time: With 57,234 m² (30 MWth) of newly installed collector area, market volume in 2013 was down to the level of 2007, according to the annual statistics of Apisolar, the Portuguese national solar industry association (see the attached document). The blue bars show the annually installed collector area (left side) and collector capacity (right). The red cubes just illustrate the trend. “Good legislation, bad economy,” is how Apisolar’s Vice President Solar Thermal, Victor Júlio, describes the current situation. The economy is far from recovering, but there is a silver lining on the horizon: A new building legislation that came into force in December 2013 has made the installation of solar water heating systems mandatory for non-residential buildings.
Source: Apisolar
The commercial segment was still a small one in 2013. Only 16% of the systems in Apisolar’s statistics were sold for multi-family buildings and industrial installations. One half of the larger private residential market is supplied by thermosiphon kits, the other half by pumped systems. “The quarterly installation figures show a strong increase in sales in the last quarter of the year, a fact that is mostly related to the way the statistical survey is done, because most companies only report accurate sales figures by the end of the year,” Apisolar explains.
New energy performance regulation
This April, the Portuguese sector has retained its gloomy mood, but some new developments offer hope for the future. A new regulation for energy performance in buildings, Regulamento de Desempenho Energético dos Edifícios de Comércio e Serviços (RECS), was approved in August 2013 and entered into force on 1 December 2013. It has now made solar water heating systems mandatory for new and existing non-residential buildings, as it has already done for residential buildings (see the attached document). In addition, a large number of European funds will soon be available to support energy efficiency measures; and, last but not least, Portugal’s consumer confidence index has slowly been increasing since 2013, from -58% in January 2013 to -31% in March 2014, according to the National Statistics Institute, INE.
Tourism – fastest-growing solar thermal segment
Some solar thermal system suppliers are convinced that the RECS can offer new business opportunities for Portuguese companies, especially in the very successful tourism sector. Miguel Gomes, Product Manager at Canalcentro, believes the tourism sector to be the most “active” sales segment for his company, in particular because of hotel renovations. This trend was also highlighted by the results of ISOL Index from December 2013. Nearly half of the 13 solar thermal system suppliers in Portugal believed the tourism sector to be the fastest-growing market segment (see the following chart).
According to Turismo de Portugal, there were 2,042 tourist units in the country last October (July 2013: 2,028 units). Victor Júlio, who is also the Sales Director for Baxi in Portugal, is not as enthusiastic about the tourism segment, but he admits that it can be an opportunity, because “hotels are businesses that want to be more efficient, and solar thermal is definitely a solution for it.” Still, the vice president is less than certain that tourism will play a “determinant” factor in improving the market. In his opinion, it would be more important to offer an additional benefit to customers choosing solar thermal energy, such as an income tax rebate or a reduction on the municipal tax for properties.
Some companies, such as Canalcentro, also call for a reduction in VAT, which increased in 2012 from 13 to 23%. “The ideal solution to strengthen and consolidate the market would be to implement an efficient thermal regulation, to demand quality/efficiency from the product and reliability from after-sales service, and to decrease VAT,” Gomes argues.
“A VAT decrease would create a new dynamic on the market, because it would serve as a 10% direct discount for the consumer,” Júlio points out. This would make solar more appealing to the consumer, but it might not be so attractive to the Portuguese government, which is in desperate need of income sources.
Last year, a EUR 2 million incentive scheme from the Energy Efficiency Fund supported solar thermal installations and window replacements. A small budget and high bureaucratic hurdles were the main complaints about a programme which added only 4,000 m2 to the area installed in 2013 – a mere 10% of the small market volume. “In the future, if there is this amount of money available for solar thermal, we would prefer to invest it in advertisement and communication,” Apisolar’s Vice President says. “One million Euros won’t save a company from having to close down, but if it is invested well in advertising, it will create an impact on the market that all of us will feel.”
https://solarthermalworld.org/wp-content/uploads/2014/04/apisolar_ano2013_resumo_21fev13.pdf
https://solarthermalworld.org/wp-content/uploads/2014/04/recs_december_2013_portugal.pdf