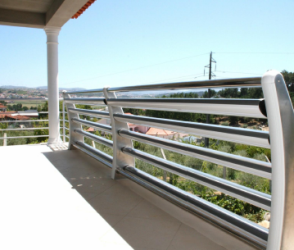 The architectural integration of solar thermal collectors has long been a concern to the industry. Portuguese company Sunaitec has now patented a new solution for the residential sector. According to General Manager Amílcar Lopes, 25 systems with the so-called ‘Multifunction Solar Structures’ have already been installed in Portugal. A first installation is also planned in Brazil. Sunaitec has been showcasing the multi-purpose solar thermal systems on several international events, including the Expo 2010 Shanghai and the GreenSolutions 2011 in Mexico.
Photo: Sunaitec

The active solar system consists of transparent plastic tubes, which have an elliptical shape and include a coated mirror sheet made of metal. The sheet directs light to a metal absorber in the focal point of the mirror (see the figure below). A tracking system holds the plastic tubes together and a software program ensures that the mirror is always facing the sun at the right angle to provide maximum yield even in winter. The condition of the equipment and all the parameters of the installation are continuously monitored onsite via Bluetooth or cable, and remotely over the web. The tracking system is also able to prevent overheating in summer, making it unnecessary to add large expansion vessels to the solar circuits.

Besides solar domestic hot water and space heating, the solution can be used to provide shading, cover or safeguards. Or, it can replace building components, such as balconies. It has a built-in sensor that closes the system and allows full cover while it is raining.

Sunaitec, which was founded in 2008, has received the support of several Portuguese entities, in particular ADENE – the Portuguese national energy agency – and is betting on the spread of the technology in emerging markets, most importantly in Brazil, Mexico and Angola. The technology itself was developed by Sunaitec’s Amílcar Lopes and Luís Lopes. All other work has been subcontracted to Portuguese companies. “This technology is, for the most part, a Portuguese development. We only import the metal mirror and the component which absorbs the concentrated sunlight and transfers the heat to the forced circulation system,” explains Lopes.

Before the system can claim any acceptance on the market, it faces two major barriers, namely the distrust in the new product and the final price of the solution. “We cannot compete with the prices of conventional solutions,” says Lopes. “That is why reducing costs is our main target.” However, he stays optimistic, “because no one has a product such as ours. So, I am convinced the technology will eventually become a success in the residential sector.”

This figure shows the shading function of the Multifunction Solar Structures, with a photovoltaic element instead of a solar thermal receiver inside the elliptical tubes.
Figure: Sunaitec

Currently, the company is working on the SunaitecVolt project, which is supported by community funds from QREN (National Strategic Reference Framework). QREN aims at developing photovoltaic and thermal components to generate electricity or steam for micro-turbines. During the development of the Multifunction Solar Structures, Sunaitec had also been busy in the field of solar air conditioning. A first pilot project was installed in the IPL – Polytechnic Institute of Leiria, Portugal, with the help of the Innovation Support Fund (FAI) and ADENE.