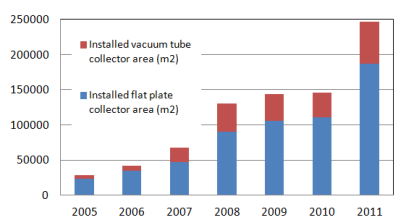 Last year, the Polish solar thermal market exceeded all expectations: While Poland became one of the fastest growing markets in Europe, the installed collector area grew by 70 % to 248,000 m² (174 MWth), according to Aneta Więcka, solar thermal market expert at the Institute for Renewable Energy (IEO). During the same year, the institute estimated a turnover of PLN 500 million (EUR 125 million) in the solar collector market. Więcka presented these and other figures at the 5th Solar Energy Industry Forum, which took place in Cracow in the middle of April.
Source: IEO

“Last year was great. We experienced a 60 % growth in sales,” Leszek Skiba, President of Hewalex, tells solarthermalworld.org. But according to IEO, most of the major producers experienced even higher growth rates, which is leading to a concentration in the market. “The big companies increased their sales by an incredible 150 % last year. The smaller firms, however, had to grapple with sales decreasing by a few %, which shows that they were not able to adapt and profit from the domestic NFOSiGW grant programme,” explains Więcka. (see http://www.solarthermalworld.org/node/1434).

The Association of Manufacturers and Importers of Heating Appliances (Polish acronym: SPIUG), however, thinks that the IEO estimate may be too high: “Our own survey showed that the market grew at a two-digit rate – but we are talking about 30-35 % rather than 70 %,” Janusz Starościk, President of SPIUG, explains to solarthermalworld.org. Unfortunately, it has been SPIUG’s policy not to disclose this data. Still, Starościk says that neither the SPIUG – nor the IEO survey, for that matter – covers all solar thermal market companies.

According to IEO, around 70 companies are now manufacturing and reselling solar thermal systems. More than half of these systems are imported. The number of solar thermal installers is about 2,000. “The number has to grow to 10,500 companies if we are to reach the national goal of 14.5 million m² by 2020,” says Więcka. IEO counted a total of 904,000 m² of collector area (equalling 633 MWth) at the end of 2011.

How does it look for the Polish market in 2012? At least industry players seem to be in an excellent mood. “We have been selling even more collectors in this year’s first months than we did in the same period during the boom year of 2011,” Skiba says. ”Whereas we sold 1,200 systems last year, we plan to sell 2,500 sets this year,” Krzysztof Romaniak from importer Hoven announces.

However, the NFOSiGW (National Fund for Environmental Protection and Water Management) scheme will have spent almost its entire budget by the end of 2012. The PLN 300 million programme is so popular that in the first quarter of 2012, the number of applications was twice as much as during the same period a year ago. The annual budget for 2011 and 2012 is said to be PLN 100 million. In 2013-14, NFOSiGW plans to spend PLN 109 million. The programme formally expires in 2015.

This news was written by Marcin Czekanski, a Polish journalist specialised in renewable energies and based in Szczecin, Poland (mczekanski(@)econaviga.eu).