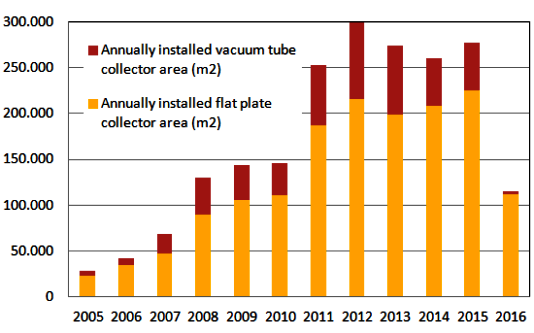 Poland´s market collapsed in 2016. A decline had been expected, but that it would be so severe surprised even insiders from the industry. Only 115,400 m² (81 MWth) were added in 2016, a whopping 58 % less than the 277,000 m² (194 MWth) installed the year prior. Consequently, Poland dropped from rank 3 to 6 on the list of the largest European markets. Between 2012 and 2014, only Germany and Italy had sold more collector area. Since 2015, annual figures have come from SPIUG, the Association of Manufacturers and Importers of Heating Appliances, and these numbers correspond fairly well to the 2016 ones by British consultancy BSRIA. Before 2015, annual market statistics had been published by the Polish Institute for Renewable Energy.
Source: IEO and SPIUG
“2016 had no attractive national support scheme in place,” explained Ireneusz Jelen, Marketing Manager at Hewalex, one of Poland’s leading collector manufacturers. The national funding scheme died off in several stages. The first setback came at the end of 2014, when the long-running residential subsidy scheme by the National Fund for Environmental Protection and Water Management, NFOSiGW, stopped accepting applications. The Prosument interim programme, which funded PV and solar thermal with an unwavering focus on renewable power production was expected to run until 2022. In summer 2016, however, it was halted as well and the remaining NFOSiGW budget was transferred to regional funds. Since then, the industry and its clients have been waiting for a new incentive scheme at regional level.
“Many of our customers hesitated to invest, because they were waiting for an announcement of new financing schemes, even regarding photovoltaics,” said Jelen. She also emphasised that the number of tender invitations for municipal projects had been cut down significantly in 2016, as international development cooperation programmes such as Swiss Contribution came to an end. In 2015, Hewalex had installed solar thermal systems in as many as 137 public buildings.
In addition to the end of national subsidy policy, “gas prices for residential customers have remained stable in the last two years, strengthening competition from combi gas boilers,” explained Krystyna Dawson, Business Manager at BSRIA. Dawson also pointed out that despite high electricity prices, domestic hot water heat pumps were seen “as a more interesting renewable solution in Poland, as they are cheaper to buy and easier to install than solar thermal systems.”
Vacuum tube collectors all but disappeared from the Polish market last year. SPIUG said that around 3,700 m² had been sold, while BSRIA estimated 5,000 m² – both figures seem negligible compared to the 86,000 m² in the peak year of 2012. Janusz Staroscik, Head of SPIUG, explained that several former suppliers of solar thermal systems had switched markets and were offering heat pumps and photovoltaic systems instead.
Websites of organisations mentioned in this article:
SPIUG: http://www.spiug.pl/
IEO: http://ieo.pl/en/
Hewalex: http://www.hewalex.pl/
BSRIA: http://www.bsria.co.uk