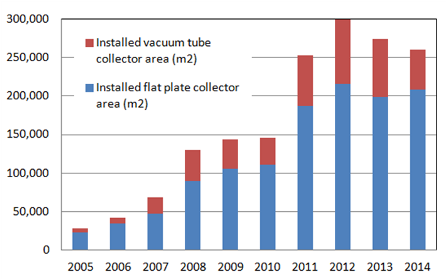 The annual market statistic of the Polish Institute for Renewable Energy (EC BREC IEO) show a clear downward trend over the last two years, mainly because of changes in the national subsidy scheme of the National Fund for Environmental Protection and Water Management, NFOŚiGW. The Prosument programme, which was launched in May 2014, stipulated the installation of a micro-renewable electricity installation before an investor was able to apply for a solar water heater. This reduced the attractiveness of solar thermal technology tremendously and became a great market barrier according to the discussion at the 8th Energy Forum held in Warsaw in May 2015. Therefore, it was good news that NFOŚiGW removed the required combination of renewable electricity and renewable heat systems in its publication on 24 June 2015, which has been in effect since 1 August 2015. But in the same decision paper by the Supervisory Board of NFOŚiGW, the programme administrator restricted the subsidy level for solar heat.
Source: EC BREC IEO

“As additional changes, the eligible costs for solar thermal systems will be reduced from 3,200 to Polish Zloty (PLN) 2,000 per kW and the subsidy amount will be capped – as originally planned for all heating installations – at 20 % of eligible costs in 2016 and at 15 % in subsequent years,” explains Aneta Więcka, solar thermal market expert at EC BREC IEO. “This will reduce the attractiveness of solar water heaters for potential consumers.”
Annual market report’s key findings
EC BREC IEO has just published the full version of its annual market report Solar thermal energy market in Poland. One trend which can be seen in the chart above is the falling share of vacuum tubes in the newly installed collector area: The 28 % in 2012 have now dropped to 20 % in 2014. Other key findings of the report in brief:
Last but not least, Więcka stressed that the decreasing demand has put some pressure on the domestic solar thermal system suppliers and new companies have difficulties entering the market.
To direct the attention of politicians towards adequate targets and support mechanisms for renewable heat, EC BREC IEO is currently drafting a Roadmap 2030 in cooperation with the industry and other associations. It is planned to be published after the parliamentary elections in October.
More information:
http://www.ieo.pl
Report and presentations from the 8th Energy Forum in May (in Polish)
http://www.obywatelzenergia.pl/viii-forum-2015