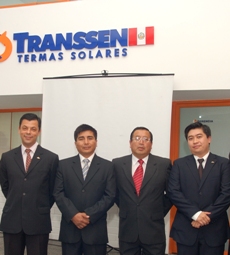 After opening the first one in Chile in 2008, the Brazilian collector manufacturer Transsen set up a second international office in Peru this year. The company has grown quickly within the national market and now wants to enter the international playing field as well. Transsen almost doubled the amount of glazed flat plate collector area it manufactures in the last two years, from 45,000 m2 in 2007 to a planned production of 80,000 m2 this year.  The export rate of glazed solar thermal collectors within the same period jumped from zero to 7 % this year. These figures do not include the number of unglazed collectors which is even higher with 135,000 m2 (2009).

Transsen Peru is a joint-venture between Transsen Brazil and Termoinox, a Peruvian solar energy specialist based in Peru’s capital, Lima.  “The alliance between two companies experienced in the field of solar thermal and energy efficiency will make for a success story in a short time,” Newton U. Koeke, the International Business Manager of Transsen Brazil, announced. Peru is seen by Transsen as the economy in South America, which will increase the most. Unfortunately, there have been no incentives for solar thermal systems so far, prompting the newly founded joint-venture to also focus on electric water heating systems based on heat pumps. Both offices of Transsen abroad are supplied with collectors “made in Brazil”.

The main business of Transsen Chile is still solar thermal. “We have installed a lot of large-scale systems in hospitals or hotels in Chile,” Koeke explains. The solar thermal market in the South American country is very dynamic. “The government is trying hard to establish good frame conditions for solar energy,” the International Business Manager says.

The strong commitment to its costumers and the ongoing market expansion were reasons enough for the Brazilian Revenda Magazine to award Transsen the Brazilian Industry Award in the category of “Conception & Image” this year. The magazine’s decisions are based on a comprehensive survey of all points of sale (POS) throughout Brazil and take into account the satisfaction of costumers and the growth rates in sales.