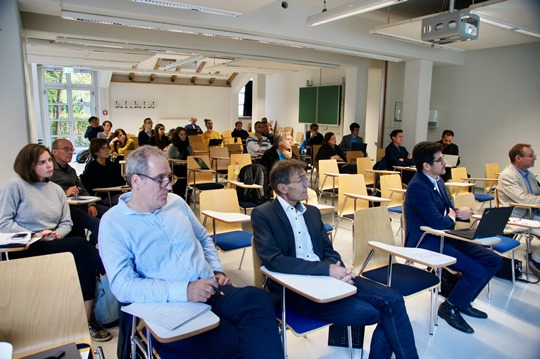 In combination with the Eurosun 2022 conference, the second IEA SHC Task 66 industry workshop entitled “Solar thermal and/or PVT combined with heat pumps as an innovative energy supply solution” took place at the end of September in Germany. Four speakers from industry presented new developments for a sustainable and climate-neutral energy supply for buildings and municipalities. Photos: Stephanie Banse

“On a global level the operation of buildings accounts for around 40 % of the primary energy consumption and approximately 25% of the greenhouse gas emissions”, stated Task 66 Manager Dr Harald Drück in his welcome speech. “IEA SHC Task 66 will focus on the development of economic and ecological supply concepts for buildings with a high solar fraction of at least 85 % of the heat demand, 100 % of the cooling demand and at least 60 % of the electricity requirements for central European climate conditions.” The key aspect is the overall energy supply of the buildings with heat, cold and power, including the interaction with electricity and heat grids in terms of bidirectional flexibility.

Andreas Siegemund, Managing Partner at Consolar Solare Energiesysteme, Germany, showed how these goals can be put into practice. Siegemund presented examples of an efficient and sustainable energy supply of various building types. A current project is the town hall in the German town of Offenbach an der Quaich. There, 100 PVT collectors with a total area of around 200 m2 supply a 51.2 kW heat pump with electricity and heat. The system is connected to a district heating network and provides both heating and cooling for the building.

Consolar’s PVT collector is 2.25 m2 in size and weighs 38 kg. The front is covered with PV cells. On the back, a special air-brine heat exchanger with a surface area of 18 m² ensures optimum heat exchange with the ambient air and simultaneous use of the PV module’s waste heat. The brine from the roof is the only heat source for the heat pump. No borehole or ground heat exchanger is necessary. The system therefore requires no additional permits or approval processes.

“The PV fields are designed so that the electricity consumed by the heat pump is generated by the collectors in total over the year.” said Siegemund, summarising the technical advantages.“ In addition, our PVT collectors are suitable as the sole heat source for a brine heat pump and can also be used to cool the building during the warm season.”

Renovation of buildings in two stages

According to Siegemund, the size of the PVT heat pump system should be selected so that it can cover 80 % of the maximum required heating demand. As a guideline for the required roof area for the PVT field, Consolar states the following rule of thumb: the necessary roof area in square metres can be estimated by multiplying the kilowatt power of a single-stage heat pump times 4 and the kilowatt power of multi-stage or inverter heat pump times 3.3.

As a way of spreading the investment costs over a longer period but reducing CO2 emissions as quickly as possible, Siegemund suggests renovation of existing buildings in two stages. In the first stage, the energy system is renovated and equipped with a heat pump, PVT collectors and a gas boiler for peak consumption. In the second step, the energy renovation takes place. This reduces the heat demand of the building, and the gas boiler is no longer needed or is only used to a limited extent. Under the product name Virtu, the company offers two PVT collector models based on vacuum tube technology as well as two high-temperature collector types without electricity generation. While the latter are already certified, the PVT version is currently in the certification process. Besides industry, the target groups for the technology are mainly large heat consumers such as hotels, supermarkets, or universities. Each tube has the gross area of 0.65 m2 or 0.47 m2 re. The tubes are installed in sets of five and can be used on all types of roof surface as well as on façades. As a further advantage of the technology, Zagorulko mentioned the low visibility of the collectors from the ground, which makes them interesting for use on historic buildings. In addition, there are no large shading gaps needed between the tubes.

As one of the monitored PVT plants, Zagorulko presented an office building in the British town of Swansea. 40 tubes of the type VirtuPVT are installed in the façade, totalling 10 kWth and 2.5 kWel. According to the Operations Engineer, the façade mounted system produced 1,700 kWh of electricity in the first year and 3,240 kWh of thermal energy. This corresponds to a specific yield of 575 kWh/kWp on the solar electric side and 125 kWh/m2 gross collector area on the thermal side.

Currently, the company is researching combinations with other regenerative technologies. “We see great potential in integrating Virtu with other sustainable technologies to amplify the delivery and storage of heat and power”, Zagorulko stated. “We are seeking partners in the areas of inter-seasonal heat storage, solar cooling, solar heat for industrial and agricultural processes, and the integration with heat pumps.” 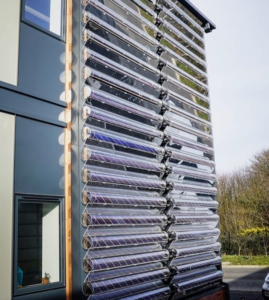 VirtuPVT on the façade of an energy-positive office in Swansea. The 36 tubes have been in operation since 2018. Photo: Naked Energy

The aim of the energy management is to maximize self-consumption and bring the energy surplus near to zero. “This is realised via a direct network communication between heat pump and PV system”, Macke explained. “A modulating heat pump and a controller are necessary for this.” The surplus from PV could be stored in the form of thermal energy by overheating the domestic hot water storage, the heat buffer, and the building.

iDM has investigated this concept using the example of a single-family house and documented the energy consumption with and without intelligent overheating. The PV system was connected to a modulating air-source heat pump. A 2,000-litre buffer and the building were used as thermal energy storage. “With the use of intelligent overheating we succeeded in reducing the consumption of grid electricity by half and at the same time increasing the self-consumption of the generated PV electricity by a factor of 5,” said Macke, summarising the results from the field test.