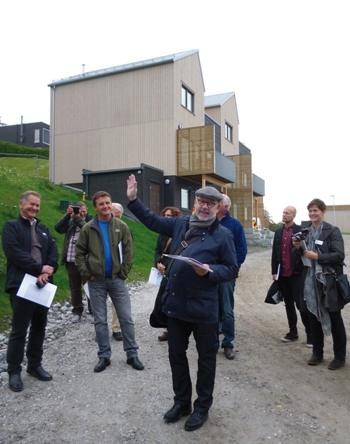 Norwegian collector manufacturer Aventa and the University of Oslo’s Department of Physics jointly hosted two meetings in the middle of October: The meeting of Task 39 (Polymeric Materials for Solar Thermal Applications) of the International Energy Agency’s Solar Heating and Cooling programme (IEA SHC), as well as the meeting of the EU’s SCOOP (Solar Collectors made Of Polymers) project. Both research programmes focus on the use of polymeric materials in solar thermal applications and are headed by Michael Köhl, researcher at the German Fraunhofer Institute for Solar Energy Systems, Fraunhofer ISE. The photo shows the attendants of the research meeting while they were visiting Stenbråtlia: Architect Hans Dahl (middle), Prof John Rekstad, CEO of Aventa (far left) and Dr Michaela Meir, Head of R&D at Aventa (far right). Stenbråtlia consists of 34 terraced houses built according to the so-called passive house standard and equipped with roof-integrated polymer collectors from Aventa.
Photo: Aventa
Norwegian building society OBOS started with the construction of the passive houses at the beginning of this year and should be almost finished by now. The estate is one of the largest projects which Aventa has realised so far. A 14 m² collector field and an 800-litre tank are expected to cover 60 % of the heating and hot water demand of each house. “The newly built Stenbråtlia estate provides ideal conditions for our collectors. The roof is facing south and the houses have floor heating, which means low operating temperatures,” Meir explains. The polyphenylene sulfide (PPS) absorbers of the Aventa collectors were developed for use in non-pressurised drainback systems, which are favourable because they avoid situations in which simultaneous pressure and heat put stress on the material. “Drained polymer collectors without pressure can resist stagnation temperatures of up to 150 °C,” the R&D Manager adds.
OBOS: from owner to user
SCOOP supported the implementation of Aventa’s technology because of the lighthouse character of the OBOS project. OBOS is the largest Nordic building society and has been an early supporter of the development of Aventa´s polymer collectors. The building society was a shareholder of the collector manufacturer between 2010 and 2013.

Solar fields integrated into terraced house roofs facing south
Photo: Fraunhofer ISE
“The estate demonstrates that comfortable indoor climate, renewable energy and aesthetic design can be successfully brought together,” Egil Wahl, OBOS Project Manager, was quoted as saying in the press release from 14 October sent out by Fraunhofer ISE. “In September 2013, we decided to go our separate ways again before we started the first projects with OBOS, because being client and main shareholder at the same time is no longer an ideal combination. Both parties agreed that OBOS`s role as a user of the Aventa technology was more important than its function as owner,” Meir explains. The Aventa team expects Stenbråtlia to not be the last project on which they will collaborate with OBOS.
Aventa CEO Rekstad has noticed a constantly growing demand for his company’s solution: In the survey for the world map of the solar thermal industry 2014, which was carried out by German agency solrico, the company reported to have sold 2,000 m² of collector area in 2013 and expects doubling its production output to 4,000 m² this year. So far, Aventa has only sold its collectors in Norway, but there are plans to export products in the future because the Solar Keymark certificate will be available by the end of this year.
More information:
http://www.eu-scoop.org
http://www.aventa.no
http://www.obos.no/english/
http://www.fys.uio.no
http://www.obos.no/stenbratlia
http://www.solrico.com