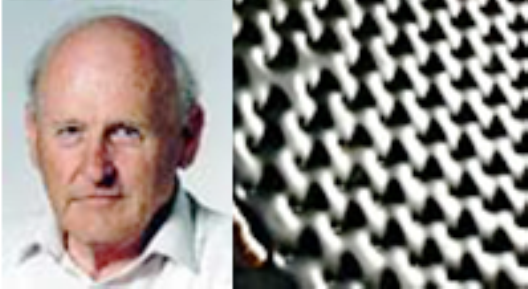 For more than 35 years, Thermocell collectors have been exclusively manufactured in New Zealand. Developed and commercialised in the late 1970s by Professor Emeritus Arthur Williamson from the University of Canterbury, these patented collector types have been produced in Christchurch ever since. In the peak years of 2005 and 2006, about 12 staff worked for Thermocell in administration, production and installation. As New Zealand’s solar thermal market has declined significantly over the past ten years, only two of those people are left today. “Arthur developed a reliable technology and we are maintaining systems which are more than 30 years old,” confirmed Ian Johns, General Manager of Sunstream Solar, a Thermocell collector reseller and installer from Christchurch. The photo shows Williamson in front of a “heat sheet”, the unique feature of Thermocell systems.
Photos: University of Canterbury / Sunstream Solar
The heart of the Thermocell panel consists of two flat steel sheets. They are welded together at the edges and spot-welded in the middle before the space between them is expanded to form a pattern of indentations by means of compressed air. This space is then evacuated and a small quantity of volatile fluid is introduced to create a flat-plate heat pipe. The steal absorber is used to collect and transfer heat from the entire surface through a water-carrying copper tube attached to the top edge. “My idea was to design and produce a collector with the same performance as the best traditional copper absorber collector in those days, but using much less copper to reduce manufacturing costs,” explained Williamson.
Improved frost protection
The design also optimises least-energy usage in frost protection mode. “The panel acts as a thermal diode by transferring heat as a heat pipe from the main area to a water tube at the top of the panel,” explains Williamson. “In frost protection mode, only the top water tube needs heat to prevent freezing, and virtually no heat is conducted downward to be dissipated from the main panel surface.” When a conventional tube-on-sheet collector is operated in anti-freeze mode, the stored warm water is led through the tubes to heat the entire panel, which results in greater heat losses.
The company’s founder managed the enterprise over more than two decades before retiring about 10 years ago. There was a certain period in Thermocell´s history when it became part of the back then fast-expanding Solar City New Zealand group in 2009 and 2010. But today, Thermocell is again independent and focuses on the manufacture of patented collectors.
Sunstream Solar generates around 60 % of its turnover by upgrading and maintaining existing systems, and about 40 % comes from residential solar thermal installations for newbuilds and existing building stock. Johns confirmed that in New Zealand, solar thermal is still a better investment option than photovoltaics, producing higher specific yields even without national funding support or subsidies.
The most recent national subsidy was granted in the form of SWH financial assistance by the Energy Efficiency and Conservation Authority (EECA). It was available between 2006 and 2010, with New Zealand Dollar (NZD) 1,000 offered to buyers of solar water heaters. “Our company did not participate in this subsidy scheme, because I disagreed with its form,” recalled Williamson. He confirmed that the decision had no significant effect on the company’s sales back then, as demand was high. “However, sales did fall off for the whole solar thermal industry when the government subsidy scheme was discontinued in the wake of negative perceptions caused by several SWH performance studies carried out at that time.”
Active disinformation campaign on micro-renewable generation
“The story in New Zealand is rather sad. There are now no support schemes for any solar or any other type of green heating and cooling system,” said Ian Shearer, Director at Consultancy Front-End Solar Technologies. “The Solar Association of New Zealand stopped receiving support from the government [from the EECA; editor’s note] and the solar thermal industry group has shrunk very considerably.”
In some parts of the country, a new space or water heating system could be funded with the help of a local government support scheme, explained Shearer. These heating system loans would have to be repaid by building owners together with their council taxes (rates). “However, solar water heating systems are often discouraged or not allowed, and even ultra-low emission, wood-fired boilers have been totally banned in some areas with air pollution problems. Often, the loans only support electric heat pumps,” said Shearer.
The consultant added that there had also been an active disinformation campaign about the option of combining micro-generation and any type of renewable energy. The power industry was charging extra network fees to householders installing self-generation systems. Shearer said that owners of grid-connected micro-generation systems for electricity feed-in were only paid between zero and 20 % of the residential retail price for electricity – despite the Sustainable Electricity Association of New Zealand repeatedly calling for a “better” deal to benefit the micro-generation industry.
Websites of companies and institutions mentioned in this article:
http://www.solarassociation.org.nz/
http://www.seanz.org.nz
http://www.sunstream.co.nz/
http://www.front-endsolar.com