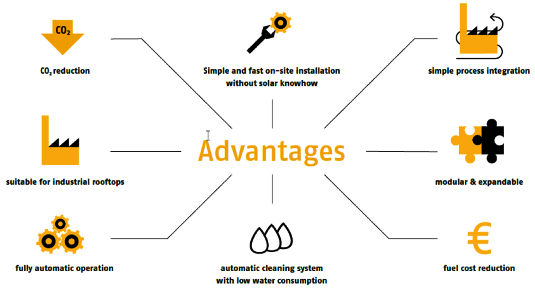 The aim of just launched HyCool is to present, in the form of two demonstration plants, new solar heating and cooling technologies for industrial use. The combination of state-of-the-art Fresnel collectors by Austrian supplier Fresnex with custom-built hybrid adsorption-compression chillers by German-based Fahrenheit will broaden the temperature range, creating a portfolio of applications to increase the use of solar heating and cooling for industrial processes.

“Our aim is to demonstrate and promote a new benchmark cooling system for industrial applications,” said Silvia Jane, who works at Spanish utility Veolia, the organisation coordinating the project. “Our HyCool systems have two advantages. They are equipped with hybrid heat pumps, which accept solar electricity or heat, or both, and they achieve twice the COP of conventional heat pumps.”
HyCool was launched in May and will last for three years. Since it is what the EU calls an Innovation Action, supported by the European Union’s Horizon 2020 programme, most of its total budget of EUR 7.74 million will be spent on building and monitoring demonstration plants. It has 16 consortium partners, including the owners of the two demonstration sites one from the food processing and one from the chemical sector.
Bo de Debò, a Spanish-based manufacturer of prepared meals, will receive a replicable system designed for small clusters of food companies that require cooling and are in areas of high solar irradiation. For product conservation Bo de Debò needs temperatures of 6 °C to 8 °C in the production hall and 10 °C to 12 °C in the delivery area.
The other, more complex, pilot plant will go to flavour and fragrance producer Givaudan, headquartered in Switzerland. The system will be installed at its factory near Barcelona in Spain, where the Fresnel collector will be used for direct steam generation in combination with a steam storage tank made of phase change material. The chiller will run exclusively on solar energy and excess heat in the form of steam will be injected into the company’s pipeline network.

New generation of hybrid adsorption-compression heat pump developed by Fahrenheit
Source: HyCool
First-ever component demonstration
Both locations will serve as the first-ever testing grounds for the two key components of the solar thermal cooling system. The compact Fresnel collector has been optimised for installation on the roofs of industrial facilities. It consists of prefabricated, factory-tested 10 m² mirror-modules featuring relatively narrow mirror strips. The gaps between these strips are small to increase the space-yield ratio. The distance from the mirrors to the middle of the receiver is 2.5 meters only.
The hybrid sorption-compression chiller can be powered by electricity as well as waste heat or solar energy. It has a sorption unit, the evaporator of which cools the condenser of a vapour compression chiller in order to raise the maximum electrical COP.
Predesign studies list a Fresnel solar field of 400 m² at Bo de Debò and 800 m² at Givaudan. Peak solar output should be at least twice as much as chiller capacity if the goal is to balance energy generation and consumption and showcase an improved energy distribution system.
Websites of organisations mentioned in this article:
Veolia: https://www.veolia.es/es
HyCool Project: http://hycool-project.eu/
Bo de Debò: http://www.bodedebo.com
Fahrenheit: https://fahrenheit.cool/en/
Fresnex: http://www.fresnex.com
Ecotherm: http://www.ecotherm.com
Givaudan: http://www.givaudan.com