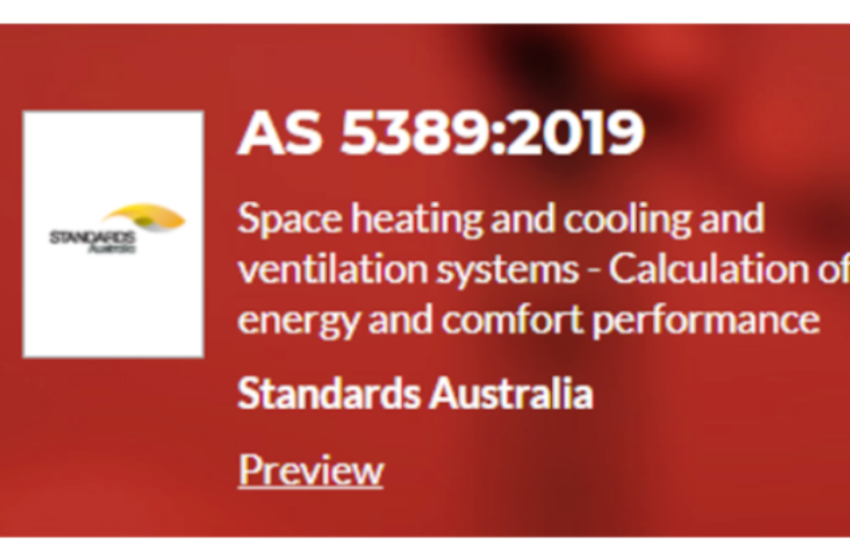 On 28 June, Standards Australia’s Committee CS-028 on Solar Water Heaters published its first standard on solar air conditioning, named AS 5389. It contains a methodology to calculate the cooling or heating loads of buildings under a variety of climatic conditions. Work on the document started in 2012, with the aim of providing a tool to estimate energy savings from solar cooling, so systems can be included in performance-based support schemes – in particular, the popular White Certificate mechanisms in Australia. The standard can be bought here. There is also booklet offering more details on the new rules, Miscellaneous Publication 103:2019, Modelling of space heating and cooling and ventilation systems using TRNSYS, which can be downloaded here.
Source: https://infostore.saiglobal.com
In 2012, several things happened which prompted the drafting of the standard: The main push came from the solar cooling research group, led by Dr Stephen White, at the Australian Institute of Refrigeration, Air conditioning and Heating (AIRAH). White also participated in IEA Solar Heating and Cooling Task 48, Quality Assurance & Support Measures for Solar Cooling Systems (2011 to 2015).
As he recalled, the development of the standard had additionally been pushed by the government of New South Wales, with the aim of making more energy-saving technologies eligible for NSW Energy Savings Certificates, also known as White Certificates: ”The NSW government was particularly concerned because manufacturers of some energy-saving technologies were not eligible for certificates, while those of incumbent technologies were,” he said.
A previous version of the standard, AS 5389(Int)—2013, Solar heating and cooling systems — Calculation of energy consumption, had been published in 2013 but covered only one solar air-conditioning technology. In contrast, the new document covers five technologies. They are
“A general thread of the technologies in the scope of this revised version of the standard is that they aim at increasing comfort, even though they cannot provide the required conditions in all cases. One example is evaporative cooling, which is a low-energy technology,” explained Ken Guthrie, Chair of Standards Australia Committee CS-028 and Australia’s representative within the IEA Solar Heating and Cooling programme.
Leader in SHC standards
Why has the first cooling standard been developed in Australia and not the European Union? Australia has quite a long tradition of developing innovative and leading standards in this sector, according to Guthrie. For example, support for solar water heating technologies is based on AS/NZS 4234, which was created in 1993 and was the basis of ISO 9459-4: 2013, the international standard on Solar Heating – Domestic Water Heating Systems Part 4. “The US SRCC standard is similar to AS/NZS 4234, and I understand that there was significant collaboration between Australian standards writers and the writers of the US version,” added Guthrie.
As mentioned above, Australia has also been a strong and long-time proponent of certificate-based support schemes, rather than granting direct subsidies. White said the country needed AS 5389 for providing a more level playing field for emerging technologies in a large multi-technology emission reduction scheme.
Basis for global solar air-conditioning standard
The new standard was created to provide methods for calculating energy consumption and determining the thermal comfort of space heating and cooling devices and ventilation systems. To reach this aim, its authors have employed a variety of approaches, such as using the results of component tests, mathematical models of representative buildings and data on comfort levels. The standard includes methodologies for calculating annual energy use and displaced purchased energy in relation to reference heating and cooling devices and for assessing comfort performance, just to name a few.
Although the rules apply to the national level only, they could certainly become a valid basis for developing an international standard on solar cooling systems.
Organisations mentioned in this article:
CSIRO: https://www.csiro.au/
IEA SHC Task 48: http://task48.iea-shc.org/
Standards Australia Committee CS-028: http://www.sdpp.standards.org.au/ActiveProjects.aspx?CommitteeNumber=CS-028&CommitteeName=Solar%20Water%20Heaters