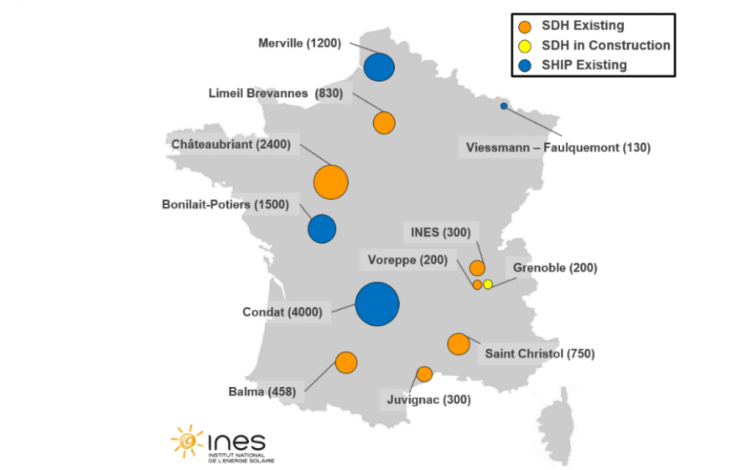 The IEA Solar Heating and Cooling Programme has just launched a database containing a substantial number of fact sheets about solar district heating technologies, best practices and markets. The 29 documents were written by the most experienced SDH researchers and practitioners from China and Europe, who collaborated on the four-year IEA SHC Task 55 – Towards the Integration of Large Solar Systems into District Heating and Cooling Networks. Accessible via https://task55.iea-shc.org/fact-sheets, the new online resource offers valuable insights into SDH research and real-world showcases by providing information on feasibility studies, the monitoring of large solar fields, the design of hybrid technologies and business models. The following paragraphs will highlight some of its content.
Illustrations: IEA SHC Task 55 Fact Sheets
Country Reports (link to pdf)
Spanning 34 pages, fact sheet D4.4 gives a detailed overview of seven prospering SDH markets, namely Austria, China, Denmark, France, Germany, the Netherlands and Sweden. France especially is worth a closer look, as the programme the country introduced in 2015 to support large solar thermal systems has had an increasingly positive impact on the market. To make their case, the authors of the factsheet point to two multi-megawatt SDH plants that were commissioned in 2018, including a 2,400 m2 field in Châteaubriant, and three others that are currently under construction in Narbonne (3,000 m2), Pons (1,660 m2) and Creutzwald (5,953 m2). And an increase in France’s carbon tax could help make SDH plants even more competitive. 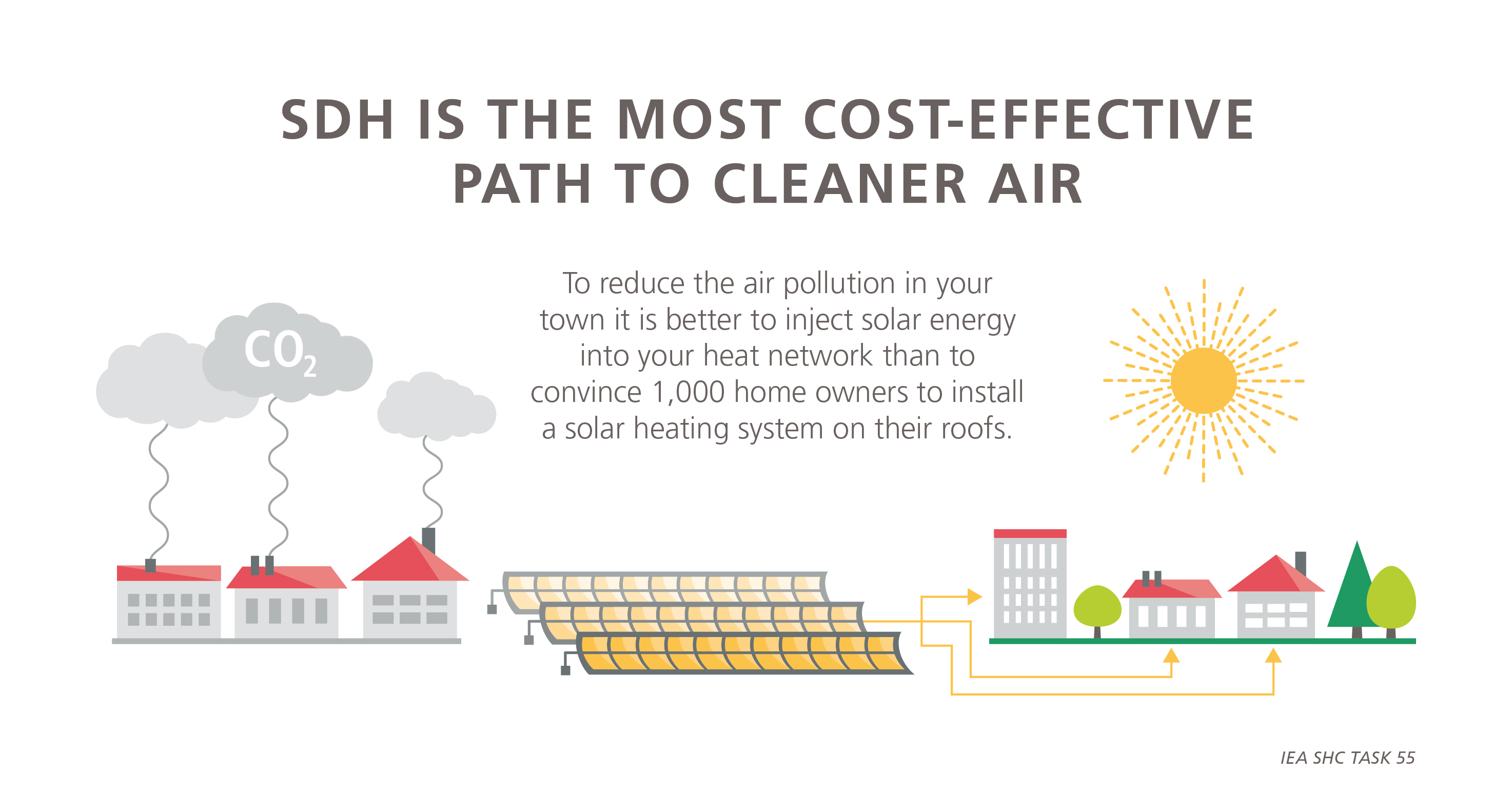 Solar Heat for Cities (link to brochure)
Fact sheet D-D2, an investor brochure, showcases nine SDH systems built in Austria, China, Denmark, France, Germany, Latvia and Serbia, with satisfied investors explaining their reasons for choosing a mix of technologies, including solar energy, to reduce their dependence on fossil fuel or be able to lower the heat prices they charge to customers. The SDH marketing package also includes 11 infographics illustrating the advantages of the technology and the policies in place to support it. The files, available in English, German and French, can be downloaded in JPG or PDF format and be used free of charge in third-party publications.

On-site tests of collector arrays (link to pdf)
Fact sheet B-D1.2, on the other hand, compares methods to monitor the performance of an installed solar field. This 21-page paper helps manufacturers, plant designers and operators choose a suitable method for giving them the information they need at acceptable costs and within an appropriate time frame. Testing procedures are based on measurement data for an entire solar field, excluding distribution pipes, and make use of a solar field model that includes corrective factors, to account for variables influencing the yield (e.g., higher operating temperatures).

Going big on SDH (link to pdf)
Fact sheet D-D1 then analyses business models and technology solutions for large solar heat systems with high solar fractions in cities. The Big SolarX Concept was first evaluated as part of a feasibility study conducted for the Austrian city of Graz. It showed a technically feasible solar share of up to 30 % and an economic optimum of about 23 %. Its business case includes an energy service company to finance, install and run the plant and sell the produced solar heat to the city’s local energy provider, at a cost including an annual net increase of 1.5 %. The authors emphasise that Big SolarX’s levelised cost of heat (30 to 40 €/MWh) is competitive to that of heat generation via natural gas (30 to 38 €/MWh) or renewables, such as biomass (30 to 45 €/MWh).
All fact sheets for download at https://task55.iea-shc.org/fact-sheets
More information:
https://task55.iea-shc.org/
News
District Heating
Austria
China
Denmark
France
Germany
Netherlands
Sweden
IEA SHC Task 55
Solar Heat for Cities