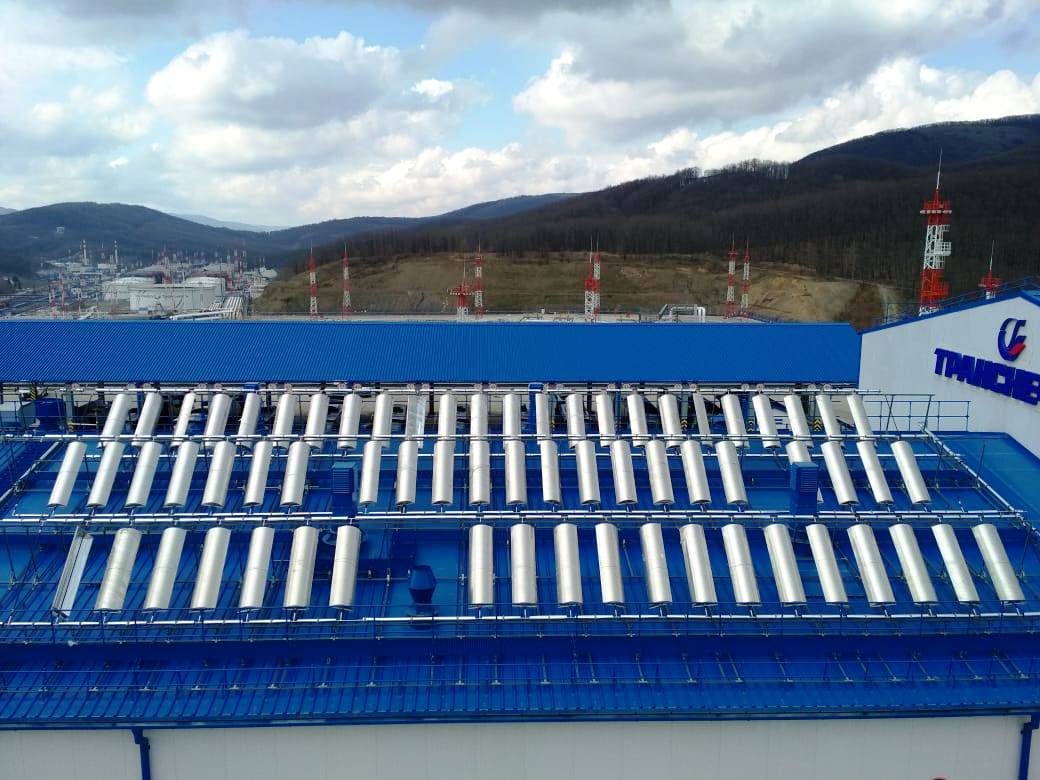 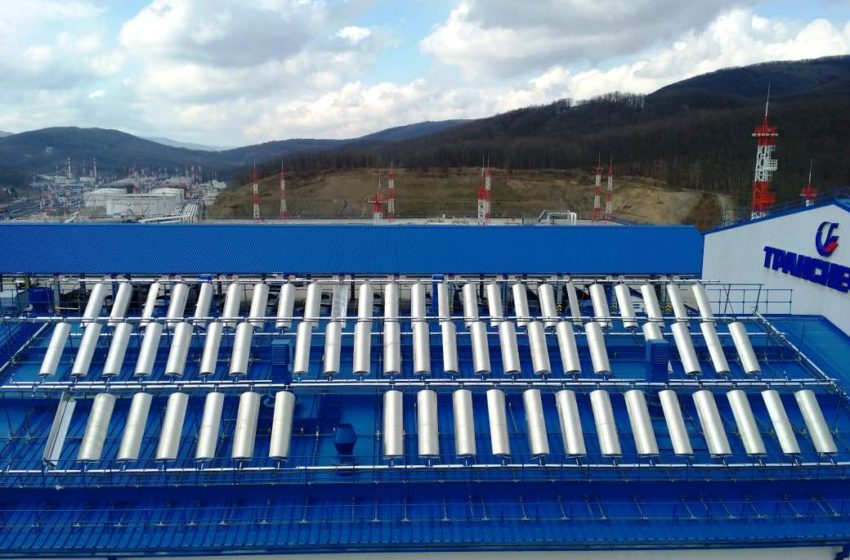 Russian Transneft, the world’s largest oil pipeline company, has commissioned a concentrating solar field equipped with German technology. In all, 135 glazed parabolic trough collectors were installed atop a building at the state-owned business’s oil depots in Grushovaya, southern Russia. The photo was taken during installation and shows the backsides of the collector units because they still had to be turned round at that point.
Photo: Transneft
“This has been our first-ever solar water heating system. We will use it for testing the new concentrating technology,” said Oleg Kozlov, Media Relations Officer at Transneft. Likewise, it was the first installation, aside from a pilot plant, equipped with collector technology by German-based supplier Persolar, said Detlef Jentsch, Managing Director of Persolar.
The collaboration between the two companies started two years ago, at the Intersolar 2017 in Munich. The parabolic trough units, type TLC-1000, measure 2 m² by 0.5 m² and are installed in parallel, with the return line entering through the bottom of each collector and exiting it at the top.
The distinctive feature of Persolar’s collectors is that every unit includes a PV panel to supply the motor and the sunlight tracking system with electricity via a condenser. Hence, the units can move individually to follow the path of the sun or away from it to avoid overheating. At nighttime, they are turned round, so that their backsides are on top. This prevents dirt from sticking to the covers, which it usually does in the early morning hours, when they are wet from condensation.
Jentsch said the collectors could be operated at temperatures of between 50 °C and as high as 200 °C to produce hot water or steam, based on the software running the control unit of each trough.

Technical drawing of trough cross-section, including absorber pipe in between the mirrors. The glass cover protecting the collector is not part of this drawing.
Illustration: Persolar
The solar thermal project was implemented as part of a Transneft programme to become more energy efficient. It has been in operation since 2008. A press release published on 8 February 2018 stated that last year had seen the implementation of multiple energy-saving measures. In addition to the solar hot water system, over 1,000 LED lights had been installed to reduce electricity consumption.
This article was written by Eugene Gerden, a Moscow-based freelance journalist specialising in renewable energies.
Organisations mentioned in this article:
http://chernomor.transneft.ru/press/news/?id=46091&nbsp;
http://www.persolar.com/sonnenkollektor_en.html