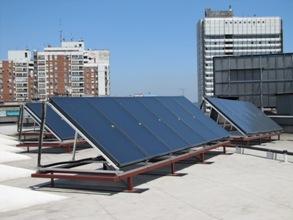 At the end of July, Serbia elected a new government led by socialist Prime Minister Ivica Dačić. He promised to follow through with the integration of the country into the European Union. This means for the new Minister of Energy, Zorana Mihajlović, that she has to harmonise Serbian energy policies with the targets of the EU Acquis Communautaire and adopt European directives on the promotion of renewable energies – such as solar thermal energy. “A law on the efficient use of energy has already been written, but not been adopted yet,” Selena Pješivac, Advisor Communications and Public Relations at the Serbian Energy Efficiency Agency (SEEA), says. This law would lay the foundation for an energy efficiency fund, a fund which could also subsidise solar thermal installations. The photo shows the solar thermal installation on the roof of the Olympic Games swimming pool in Belgrade.
Photo: Tisun

“Despite a growing number of solar thermal energy installations in Serbian towns, such as Niš, Novi Sad and Belgrade, the use of solar thermal energy is still in its early stages,” Pješivac regrets. “What we need is a bold move to support the promotion of solar thermal and other renewable energy sources and make sustainable investments a reality,” Pješivac says. A National Renewable Energy Action Plan to determine the renewable energy targets is planned to be adopted soon. Pješivac is both hopeful and optimistic that “the solar thermal industry will grow in Serbia over the next years”. With up to 2,500 hours of sunshine per year, Serbia’s climate is well suited for solar energy use. According to data published by the Serbian Ministry of Mining and Energy, the daily average insolation is 3.8 kWh/m². The ministerial experts estimate that if all 2.65 million housing units would receive 4 m2 of solar collectors, Serbia could save 7,420 GWh of electrical energy per year, or EUR 370 million.

Vladimir Janković is an expert in renewable energy and Chair of the NGO “The Renewable Energy Sources Promotion, Development and Implementation Centre – CENTRALA”. According to his information, 1,000 m² of collector area were installed last year on private houses and about 800 m² on public buildings, such as hospitals, schools, nurseries and sports complexes. “The initiative to use solar thermal energy solely came from individuals who understand the importance of solar energy applications,” Janković says, while criticising that state administrations and local communities did not contribute one bit to increasing the use of solar energy. “Also, the new government has had no definite plans so far on how to promote solar energy use,” he regrets. Janković adds that the Serbian industry for solar thermal facilities is small, with only three manufacturers producing a total of around 300 collectors per year.

CENTRALA has been promoting renewable resources of energy for seven years – mainly in the field of solar thermal, “because that best suits the Serb’s purchasing power,” Janković says. In his opinion, the low prices of electrical energy of around 0.05 EUR/kWh are not stimulating investments in solar systems. For four years now, CENTRALA has been responsible for the country’s contribution to the European Solar Days by organising events in some Serbian cities.

Although there have not yet been any government programmes providing low-interest loans or incentives to support investments in solar thermal technology, Serbian people can apply for energy efficiency credits at the Čačanska Banka. The bank has reached an agreement with The Green for Growth Fund (GGF), Southeast Europe, and has granted over 100 loans over the last four years for measures such as revitalising heating networks, insulating residential premises, improving and replacing window systems, and setting up little smart energy systems, for example, solar thermal facilities or heat pumps.