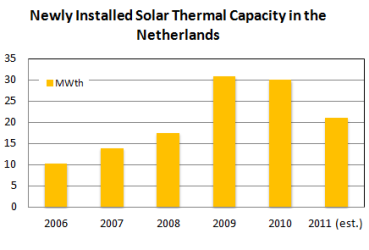 Last year’s sudden stop of the incentive programme Duurzame Warmte resulted in a drawback for the Dutch solar thermal industry. Still, Arthur de Vries from Holland Solar is convinced that 2012 and 2013 will be different: Probably even within the first quarter of this year, the Netherlands is going to have its own feed-in-tariff for renewable heat. Energy performance of new and existing buildings will be tested under stricter requirements and several provinces have launched their own incentive programme. The figure shows the annual installed solar thermal capacity in the Netherlands. It has increased significantly since the start of the Duurzame Warmte programme in September 2008.
Figure: ESTIF

Originally, the incentive scheme Duurzame Warmte was scheduled to run until the end of last year. But the programme came to a sudden halt in February 2011. The new government of liberals and conservatives, which had taken over in autumn 2010, redefined priorities, freezing the scheme’s budget just one month after its start.

The Netherlands’ solar heat goals do not seem very ambitious in the long term: According to the National Renewable Energy Action Plan, the 2020 target states only a 15 % increase in today’s totally produced solar thermal heat (2010: 20 ktoe; 2020: 23 ktoe).

Still, the government is planning to integrate renewable heat into the Dutch feed-in tariff scheme SDE+ (Stimulering Duurzame Energie), which replaced the former scheme SDE in 2010. Soon, the same concept might be applied to renewable heat as well. Although details still need to be worked out, it seems clear that the feed-in tariff will be financed by a surcharge on fossil fuels. In addition, tariffs may be paid out to all large renewable heat systems, not only those connected to a district heating grid. The criterion for large systems is thought to be a collector area of 100 m2 and more.

De Vries believes that although there are some weak points to it, the feed-in tariff can become an important instrument in supporting large solar systems. However, Sjef Zijlmans – project manager at ZEN Renewables – is sceptical that the SDE+ will be a big help. One reason for it is that the tariffs currently under discussion are so low that they do make for a little extra profit in case of already planned systems, but will not give a big push to the overall market. The other reason lies in a mechanism which is unique to the SDE+ scheme. At present, electricity tariffs are not based on the single types of technologies. Instead, there are tranches with different tariffs per kWh, which increase over time. It is a bit like in a quiz show: You can either apply early for a low incentive to make sure you get one at all. Or, you can wait and hope for a higher one. The intention is to give an advantage to those systems that are close to economic viability and need only little extra money. If there is still some budget left after the first tranche, investors can apply for a higher incentive. “There is an extra rule for renewable heat – you can only apply for it during the 4th tranche, beginning in September 2012. It is very likely that the budget has run out by then,” Zijlmans says.

Zijlmans and de Vries agree that the energy efficiency criteria for buildings will be the most important measure when it comes to small systems. Since January 2011, the Energy Performance Coefficient for new residential houses in the Netherlands has been changed to 0.6. Roughly speaking, this means that an average single family house must not need more than 600 m3 of natural gas per year for space heating and hot water. This is almost impossible to reach without renewable energies. The EPC for new buildings will be reduced gradually and will reach 0.0 in 2020.

As in many European countries, the Dutch construction sector has dropped dramatically due to the economic crisis, reducing the effect of regulations for new buildings on the solar thermal market. There has already been an energy labelling system for existing buildings. Energy efficiency has to be improved whenever an existing building undergoes refurbishment. The retrofit is based on the primary energy that is needed in the building.

In addition to the national regulations, various regional schemes have started to grant incentives as well. However, all of these measures are temporary. “They will increase awareness about solar thermal, which makes them excellent initiatives. But in the long term, a building’s energy performance should become the most effective incentive for solar thermal in the Netherlands,” de Vries says. And as everywhere in the world, a rising oil price will play a role, too.