Brazil ranks fourth on the list of the world’s largest solar thermal markets, but very few installations have been integrated into a facade or roof. Sylvio de Podestá is the architect behind one of the buildings that have roof-integrated collectors. At this hotel in Belo Horizonte, also known as Brazil’s solar capital, the collectors are at a slope guaranteed to maximise efficiency (see image). Usually, solar systems are added during construction, long after the design stage.
Image: Sylvio de Podestá
One of the reasons for the late addition of these systems is a lack of public policy to encourage a more efficient use of equipment, according to Professor Rejane Loura, who works at the School of Architecture of the Federal University of Minas Gerais in Belo Horizonte. She also said that current municipal laws dealing with building registration led to a fragmented process, during which professionals did not communicate with each other, compromising the architectural concept. Throughout Brazil, but specifically in Belo Horizonte, building design approval is a long and arduous process, which takes place before construction. Any amendments can add to the costs and prompt delays.
Belo Horizonte has only a few buildings where, in some way, the heating system is part of the design. Nevertheless, there is no facade integration. Podestá said that one of the biggest hurdles to this type of integration was the weight of the solar collectors. “If, one day, we wish to have this kind of interplay between architecture and solar thermal, the collectors will have to be redesigned,” he said. 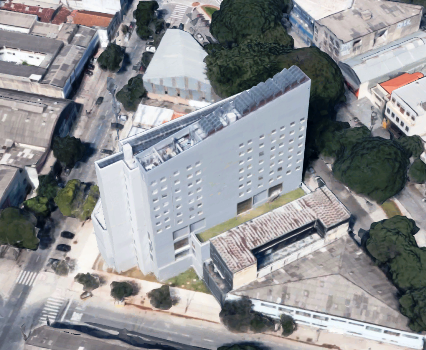 View of the hotel and its roof-integrated solar thermal system in Belo Horizonte
Image: Google Maps
Most of the buildings for Belo Horizonte’s upper class have solar thermal systems. The collectors are usually installed on available roof area. Even though there is no detailed planning process, some of these systems meet up to 70 % of hot water demand. Loura said that the climate is one more factor leading to a lack of alignment between system and building construction. “Belo Horizonte is blessed with a great deal of sunshine. No matter how you arrange the equipment, it will work well and heat the amount of water people need. That’s why they don't put in a lot of effort,” she said.
In sunny cities such as Belo Horizonte, careful planning may not be required for an efficient system, but in others, such as Porto Alegre, Curitiba and Florianópolis in southern Brazil, where clouds often dominate the sky, solar integration could use some adjustment.
Several cities in the state of São Paulo do have laws which stipulate the use of solar heating in residential buildings. However, Loura said that those laws would end up tarnishing the technology’s reputation, as not all buildings could have fully functioning systems.
In addition, she pointed out that architectural education would need to include solar thermal technology. Professionals’ lack of knowledge, combined with a fragmented construction process, made it even more difficult to integrate a system into a building.
Despite the difficult circumstances surrounding solar integration in Brazil, Loura retains an optimistic view of future market development. The capacity limit of hydropower generation means that every renewable source of energy becomes more valuable each day.
This article was written by Leticia Sother, a Belo Horizonte-based freelance journalist who holds a bachelor’s degree in architecture.
News
Domestic Hot Water and Heating
Brazil
roof-integrated collectors
Sylvio de Podestá
Federal University of Minas Gerais