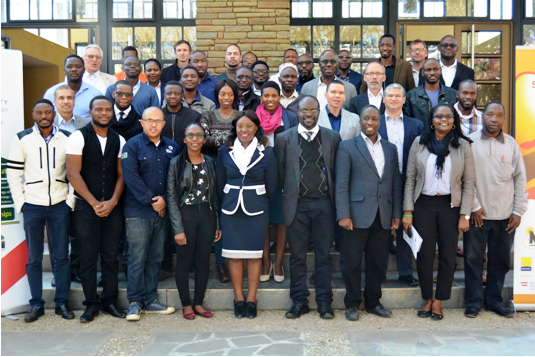 The Namibia Solar Thermal Technology (STT) Roadmap outlines the country’s path to 1.5 million m² of collector area by 2030. The aim is to have an average 0.5 m² installed per inhabitant by then (see the attached document). During a workshop in Windhoek last June, stakeholders from policy and administration voiced their unequivocal support for the implementation of the STT Roadmap 2030, which was developed by a consortium of experts and funded by SOLTRAIN, the Southern African Solar Thermal Training and Demonstration Initiative.
Photo: Namibia Energy Institute
The objective of the roadmap is to establish a sustainable and quality-controlled solar thermal value chain that will make Namibia less dependent on foreign resources. “We have plenty of sunshine, but we still import almost 60 % of our electricity. We have to bring energy security to our own country,” Helvi Ileka, Head of the Centre for Renewable Energy & Energy Efficiency at the Namibia University of Science and Technology and co-author of the document, emphasised during a video interview with solarthermalworld.org.
A programme monitoring residential solar water heaters in Namibia has shown that families can save 40 % on their annual electricity bill if, instead of electricity, they use solar energy for water heating. Solar thermal is regarded as a demand side measure to take pressure off the national power grid. To meet the 1.5 million m² target, efforts will focus on single-family buildings (600,000 m²), social housing (400,000 m²) and multi-family properties (100,000 m²).

Sector-specific solar thermal targets until 2030
Source: SST Roadmap
An article published on the SOLTRAIN website quotes several stakeholders who took part in the June workshop and pledged their support for implementing the roadmap, for example:
The plan for implementing the SST Roadmap is divided into two phases, according to the above-mentioned article. The 1st phase from 2017 to 2021 will be dedicated to awareness raising, policy support and training, with the intent to install more than just a few systems. The 2nd from 2022 to 2030 is said to lead to full-scale deployment. The roadmap steering committee will monitor and supervise all activities.
Websites of institutions mentioned in the article:
http://soltrain.org/
http://nei.nust.na/
http://www.nampower.com.na/
http://www.ncrst.na/
http://www.eifnamibia.com/
https://solarthermalworld.org/wp-content/uploads/2018/01/namibia_roadmap_soltrain.pdf