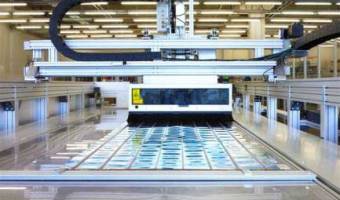 Laser welding machine for absorber sheets: A patent in the United States could slowdown the development of this technology.
Photo: Sunlaser Consulting

”No company can produce, sell or distribute solar collectors with laser-welded absorbers on the U.S. market without an agreement with Heliodyne.” This is what Ole Pilgaard, president of the California based manufacturer for storage and collector systems, pointed out this January to some of his competitors in an email obtained by our editorial office.

The background: Heliodyne, a subsidiary of the Danish VKR Holding, purchased the licensing rights for U.S. patent 6300591 on laser welding of absorbers from the Californian research institute Sandia National Laboratories. The system supplier and Sandia agreed on sole utilisation rights for this technology for seven years. “We published a federal business opportunities announcement on this technology last summer to publicly announce that we were interested in licensing this technology. Only Heliodyne contacted us,” explains Brent Burdick, Sandia’s licensing executive. The agreement with the research institute allows Heliodyne to issue sub licenses to manufacturers and providers of collectors with laser welded absorbers. Ole Pilgaard did not publicly comment on the process.

The European solar thermal companies involved are not that hesitant: “We are very unhappy about the fact that a much promising technology is being put at a disadvantage before it can even establish itself on the market,“ says Stefan Brändle. He is the managing director of Sunlaser Consulting, a company that specialises in developing and distributing laser welder machines. Stefan Hirzinger, product group manager for solar thermal systems at the German collector manufacturer and system supplier Viessmann, confirms receiving the email from Ole Pilgaard: “We will take a closer look at the legal situation. We have not yet contacted Heliodyne due to the heavy work load we must cope with that short before the international fair ISH at the beginning of March.“

From a European point of view, the patent from 2001 seems challengeable since there have already been publications from the year 1999, describing tests on collectors with laser welded absorbers at the Swiss test institute SPF by the then company Lenz Wärmetechnik. “We were more than surprised by the exclusive license Heliodyne is holding since the joining technique has been state of the art since the 1990s,“ adds Ingo Beyer, the managing director of Alanod Aluminium-Veredelung GmbH & Co. KG, one of the solar thermal industry’s largest providers of absorber plate coatings. “Besides, we told Heliodyne that this procedure runs counter to the development of that market and thus to the ambition of the U.S. government to promote renewable energies with the highest efficiency possible.“

In 2002, Alanod introduced a selectively coated aluminium absorber to the market and therewith started the process of laser welding to combine aluminium sheets and copper tubes. Now, the German company made its first steps onto the U.S. market. “We decided in early 2008 to set up a laser welding plant for fins in our subsidiary in Cleveland, Ohio, to help preparing this market for highly efficient absorber surfaces as soon as possible,“ recounts Beyer. Alanod will now consider all of its options to make sure the monopoly patent, “does not hinder our activities and the activities of our customers,“ as Beyer puts it.