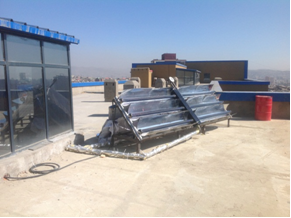 With an annual mean temperature of zero °C, Ulaanbaatar is considered the coldest capital in the world. This is not its only superlative, however, as the Mongolian city is also said to be the one with the worst air pollution worldwide. Around half of the country’s population of three million lives in the capital, where they get their electricity from outdated coal power plants and their heat from coal stoves. Because Mongolia is also known as the “Land of the Blue Sky” due to its more than 250 sunny days per year, setting up solar thermal systems seems to be an ideal measure to combat the high air pollution levels. Ordinary solar water heaters, however, would hardly be able withstand the extremely cold winter weather with daily temperatures of between minus 10 and 40°C.
Photo: Mongolian National University (MNU)
“Mongolia is a most demanding environment for solar energy, but also with a critical need to replace the burning of coal and improve air quality. If a solar system works in Mongolia, it will work anywhere,” Professor Roland Winston, Director of the Advanced Solar Technologies Institute at the University of California Merced (UC Merced), says. Winston is cooperating with Mongolian colleagues from the engineering faculty at the Mongolian National University (MNU) in Ulaanbaatar in designing, installing and testing solar thermal collectors which can withstand the harsh Mongolian weather conditions.
“The Mongolian market is currently dominated by flat plate collectors, but they don´t have the high-temperature capability to provide process heat,” MNU’s Solar Project Director, Kevin Trzcinski, says. He explains that the country needs cost-effective solar thermal collectors which can produce heat between 200°C and 250°C. By using designs available from UC Merced, Trzcinski and his team have developed the so-called External Compound Parabolic Concentrator (XCPC), a non-tracking, high-temperature 2.5 kW solar thermal collector system. In order to test the system, the first demonstration project came into operation on the roof of an MNU building in February 2014.
Start-up to commercialise concentrating process heat collector
“Our XCPC consists of a series of stationary evacuated solar thermal absorbers, coupled with external non-imaging reflectors,” Trzcinski explains. Each of the absorbers is being placed in the centre of an evacuated glass tube and thermally connected to a manifold through a U-tube. A non-imaging aluminium reflector encloses each glass tube. During the course of the MNU–UC cooperation project, two fluids were tested for their suitability as heat transfer mechanisms. “Whereas conventional flat plate collectors cannot operate with a positive efficiency at temperatures above 121°C, our XCPC system represents a major advancement in the field of low-cost high-temperature solar thermal collectors,” Trzcinski says. According to the paper, the highest temperature that the system has been able to achieve was 200°C. Improving the insulation of the pipes and increasing the number of tubes in the array should lead to the expected operating temperature of 250°C.
Trzcinski is convinced that the XCPC system can replace coal heating, reduce air pollutants and minimise the health risk to Mongolians. Together with his research colleagues, he plans to start up a new business venture, NewMonCo, in order to commercialise the XCPC technology. In the future, NewMonCo is thought to sell, insure, maintain and monitor XCPC systems for residential and commercial clients in Mongolia.
More information:
Advanced Solar Technologies Institute, University of California: cast.ucmerced.edu
Mongolian National University: http://www.mnu.edu.mn