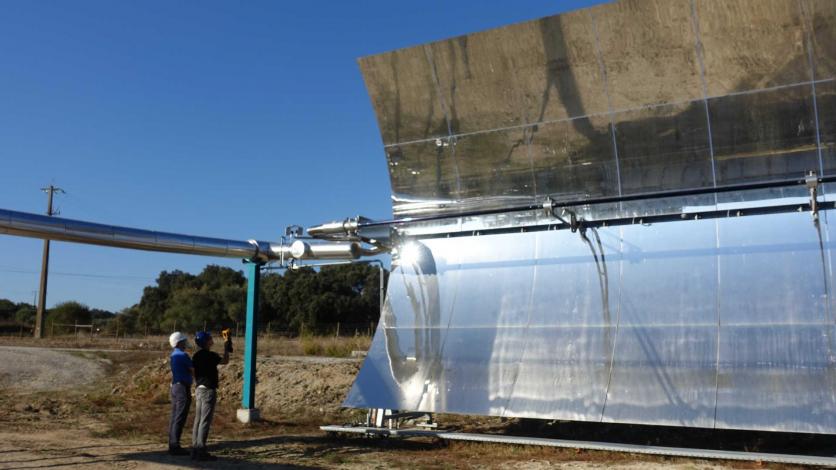 In a parabolic trough collector demo plant run by the German Aerospace Center (DLR) in Évora, Portugal, molten salt is used as a heat-transfer fluid instead of thermal oil. The advantage of molten salt is its stability at higher temperatures. Whereas thermal oil cracks at above 400 °C, molten nitrate salts, such as so-called “solar salt” remain stable until 565 °C, according to a press release sent out by the DLR on 25 October 2021. The filling process is a technical challenge as all the salt-carrying components of the collector field must be heated to prevent the molten salt solidifying in the pipes. The photo shows the demo plant in Évora, where project engineers are checking the surface temperature of the pipelines.
Photo: German Aerospace Center
Molten salt thermal energy storage on a large scale is already in use in concentrating solar power plants around the world. According to DLR estimations, the worldwide installed molten salt storage capacity is about 60 GWhth with an average storage duration of 7 hours.
In commercial concentrating solar power (CSP) plants with solar tower technology, molten salt is currently used in two-tank storage systems. The temperature in the “cold” tank is set to around 290 °C, which is mainly determined by the crystallisation temperature of the salt of 240 °C plus a safety margin. The salt is then pumped through the heat source, for example a solar receiver heated by concentrated solar radiation or combustion heat, and into a high temperature storage tank. The maximum operation temperature of the molten salt circuit and storage is 565 °C, mainly dictated by the molten salt’s thermal stability.
Modern parabolic trough plants, however, still make use of thermal oils as heat-transfer fluids due to the higher risk of solidifying of salts in the long pipe systems. Due to the immense cost of thermal oils, molten salts are used for thermal storage, requiring an additional oil to molten salt heat exchanger (see photo below). The storage system in parabolic trough plants is therefore an indirect storage system where the maximum temperature is limited by the thermal oil, which is only thermally stable below 400 °C. 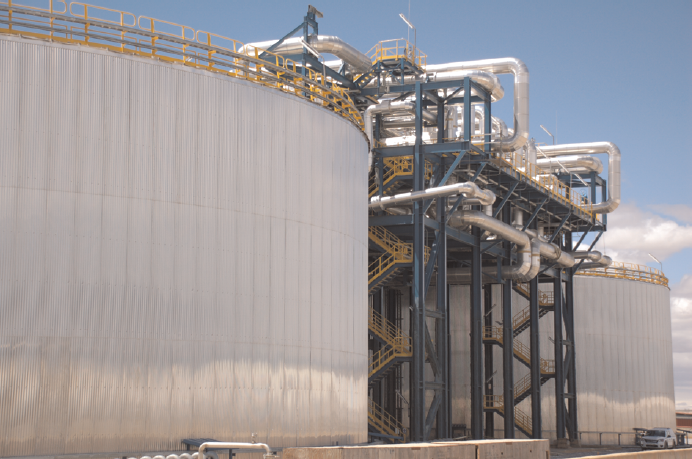 Example of a 1,000 MWhth two-tank molten salt storage system in the Spanish CSP plant Andasol 3. In this commercial plant thermal oil is used as the heat-transfer fluid.
Photo: Andasol
The novelty of the Évora demo plant is that the molten salt is not only used as a heat-storage medium but also as a heat-transfer fluid in the collector field, thereby completely replacing thermal oils. This new concept reduces the levelized cost of electricity in two ways: the field can be operated at higher temperatures, which increases the efficiency of the conversion into electricity, and the fact that an oil to molten salt heat exchanger is not required reduces investment costs significantly. Driving solar fields with molten salt as a heat-transfer fluid can also play a key role in decarbonising energy intensive industrial processes, where steam temperatures at and above 500 °C are needed.
“Molten salts have very suitable properties. They are non-toxic, non-flammable and non-explosive and are available, for example, on the fertilizer market,” explained Thomas Bauer, Team leader of the group Thermal Systems for Fluids at DLR during his keynote speech at the Solarpaces 2021 conference at the end of September. Furthermore, the viscosity at 560 °C is about the same as water at room temperature and molten salts have high volumetric heat capacities.
In this talk, Bauer also introduced the typical solar salt, which is a non-eutectic mixture of 60 % by weight sodium nitrate and 40 % by weight potassium nitrate. This mixture has been defined by the practitioners as a compromise with regard to melting temperature, single salt costs and heat capacity, he explained. As sodium nitrate has a higher heat capacity and a lower price, its volume was increased in the mixture while accepting that the melting temperature increased to around 240 °C instead of 222 °C for the 45 / 55 % by weight mixture.
In terms of usage, there are several decades of experience with different molten salt mixtures as heat-transfer fluids in industrial processes up to 500 °C, confirmed Bauer in his keynote speech.
Organisations mentioned in this article:
https://www.dlr.de/EN/Home/home_node.html
https://www.solarpaces-conference.org/home