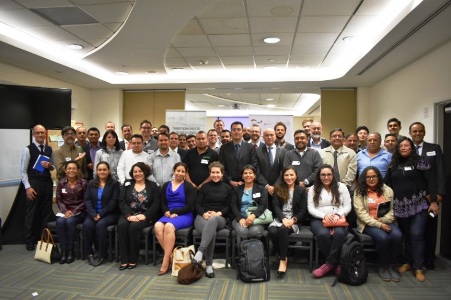 During an event in Mexico City on 30 August, a collaboration agreement was signed to establish a platform for promoting solar heat in Mexico. The partners in this project are ANES, the national solar energy association; DKTI Solar, the Large-Scale Solar Energy Programme by the German Agency for International Cooperation; and CONUEE, the National Commission for Energy Efficiency. The agreement is intended to result in an inter-institutional platform, to which stakeholders will contribute at their own expense.
Photo: GIZ México
Collaborative efforts will be concentrated on designing, establishing, implementing and managing a new initiative to promote the use of solar heat in Mexico, particularly in end-consumer sectors such as industry. Thermal energy demand by Mexican manufacturers is to be aligned with the amount of technology and financial support available to the market.
The collaboration will advance the creation of an inter-institutional platform, where stakeholders from government and administration, the private sector (industrial end users, SHIP service and technology providers), academia, research and financing can exchange ideas and join forces to work on new projects.
The three lead institutions will coordinate platform activities, joint projects, resources and knowledge gathering to create long-term synergies based on current, individual initiatives in the Mexican solar process heat market.
The signing ceremony was attended by more than 70 representatives from public and private organisations. All of them actively participated in the planning workshop to provide valuable input for specifying future activities and lines of action in five working groups:
Each working group’s proposals are currently under review. The aim is to develop a solid and overarching strategy for the next 24 months, a highly relevant task considering the presidential election in Mexico in 2018.
The country’s solar process heat market is of considerable size. At the beginning of September 2017, the database on industrial heat plants showed 59 systems in several sectors, such as the food and beverage, the pharmaceutical and the chemical industry. The most recent solrico survey from November 2016 had two Mexican businesses in second and third place among 71 turnkey SHIP suppliers based on the number of reference projects: Inventive Power, which had completed 35 parabolic trough collector installations, and Módulo Solar, whose figure of realised flat plate collector projects stood at 33.
The Mexico office of the German Agency for International Cooperation has had good experiences with forming working groups to tackle certain issues relevant to the solar thermal market. In 2013, it brought together a group of solar testing institutes for developing a new standard and set up a Comité de Gestión por Competencias de Energía Renovable y Eficiencia Energética, a Committee on Professional Training in Renewable Energy and Energy Efficiency, which has led to training sessions for installers.
Websites of institutions mentioned in this article:
http://www.anes.org
http://www.conuee.gob.mx/
https://www.giz.de/en/worldwide/306.html
http://www.solrico.com
http://www.ship-plants.info
http://modulosolar.com/mx/
http://inventivepower.com.mx/?lang=en