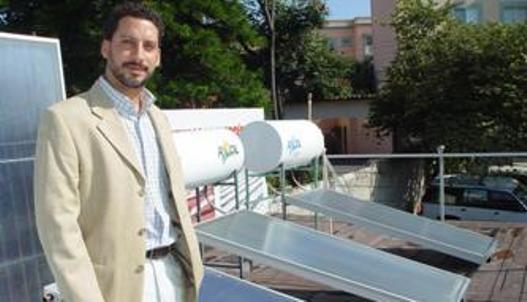 The election of the new Mexican government in December 2012 officially ended the strategic plan for solar thermal energy, Procalsol. The organisation of solar thermal manufacturers, FAMERAC, has been in talks with the Mexican National Commission for Energy Efficiency (CONUEE) and the new energy ministry to develop a strategy for a new Procalsol from 2013 to 2018. But Procalsol as a strategic framework is only one of three areas in which FAMERAC is lobbying for solar thermal at the moment, says Daniel García, the new President of FAMERAC and Sales Director of Mexican collector manufacturer Modulo Solar. The second area is standardisation and quality assurance of solar components and systems. The third concern of the association has been to improve the quality of solar installations.
Photo: Modulo Solar

Because Procalsol had only been a strategic framework, its end did not directly affect the loan programme Hipoteca Verde. The “green loans”, which can be used to finance solar thermal systems (see http://solarthermalworld.org/content/green-credits-mexico-push-market), are still in place. Regarding the

loan programme, FAMERAC is lobbying for stricter quality standards. In October 2012, the government changed the “Dictamen técnico de energía solar térmica en vivienda” (DTESTV), Hipoteca Verde’s mandatory standard for solar thermal systems. It has now become quite similar to European standard EN-12976. This means that it includes a thermal shock test, a positive pressure test (to simulate wind load), a hail test, a high temperature test and an anti-freeze test. According to the newly elected FAMERAC president, Daniel García, the new tests have significantly reduced the number of certified collectors. “With the old Dictamen, we had about 200 successful system tests. With the new one, we have had about 30 so far,” Garcia says. About one-half of the successfully tested systems are domestic and the other imported systems. They also both include systems with flat plate and vacuum tubes. “It is not a question of technology or origin, but of quality,” Garcia points out.

With about 55,000 small solar water heaters in 2012 (approx. 110,000 m²), Hipoteca Verde only accounts for around one-third of Mexico´s collector market, which means the DTESTV does not apply to many systems across the country.

Solar systems not financed through Hipoteca Verde are left with only a voluntary standard called NMX-ES-004-NORMEX. This standard does not include many of the tests which are now part of the Dictamen, such as the anti-freeze and positive pressure test. According to Garcia, there are actually plans to add tests to the NMX-ES-004-NORMEX. “We are working with the responsible committee to align the NMX-ES-004 with the Dictamen,” Garcia says. He expects the integration of additional tests into the NMX-ES-004 to take four to six months.

To ensure the quality of installations, FAMERAC has teamed up with other renewable organisations to form the committee “Comité de Gestión por Competencias Laborales” under the roof of parastatal organisation CONOCER. Garcia is the committee’s Vice President. President is Álvaro Lentz Herrera, who also heads the national solar energy association ANES.

The committee has specified the job skills necessary to install renewable energy systems. In case of solar thermal, the committee members have created the standard “Instalación de sistema de calentamiento solar de agua termosifónico en vivienda sustentable”. Starting in the second half of this year, installers will require a certification according to this standard in order to install collectors financed by Hipoteca Verde loans.

Besides all efforts of standardisation, the new Procalsol should include new financial programmes for solar water heater use in the industry and hotels. According to FAMERAC, using solar water heaters should also be mandatory, for example, in new residential and commercial buildings.

According to Garcia, the total newly installed collector area in Mexico in 2012 was 300,000 m². Garcia assumes that 50 % were for residential buildings, 35 % for pool heating and 15 % for hotels and industry. He has calculated that pool-heating collectors are 95 % unglazed, whereas glazed ones make up 95 % in all other application areas. In 2011, the total newly installed collector area was 280,000 m², with glazed collectors contributing 190,000 m² to it.

At the moment, FAMERAC gathers statistical data from its members and the renewable energy association ANES. To improve the statistics, García is planning a closer cooperation of FAMERAC and CONUEE with the economy secretary. “Officially, the government should make a national report on renewable energies. But so far, the reports have only included estimations, not real numbers obtained from manufacturers and importers of solar thermal technology,” he says and adds, “We are trying to change that by cooperating more closely.”