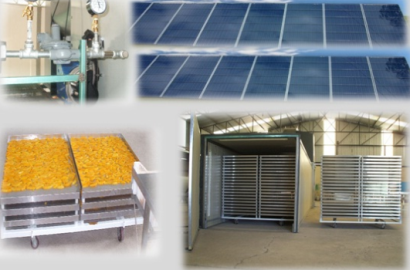 Since 2006, Captasol has been a Mexican manufacturer of solar dryers used in the agricultural sector. Now, eight years later, the solar thermal collector producer is about to offer its first solar air-heating systems to the industrial market. The company claims that its solar air-drying units for agricultural applications have payback periods of around one year.
Photos: Captasol
When thinking of solar thermal technology, most people will tend to associate it with hot water for sanitary purposes (shower or kitchen). Only a few would consider hot-air collectors for drying purposes in agriculture and industry, which is an interesting and growing niche market in many developing countries such as India.
Typical size: one 2.5 m² air collector for 30 kg of produce
On the other side of the world, in Mexico, only one of the ten to twenty solar thermal collector manufacturers has specialised in solar drying. Captasol, based in Guanajuato, a city in central Mexico, has been a manufacturer of hot-air solar dryers since 2006. The systems have mostly been adapted to drying a large variety of food, such as vegetables, fruit, grain, meat and seafood. The mechanism of the dryer is quite simple: A solar thermal collector made of aluminium or a selective surface and covered with glass captures the sunlight, and a fan circulates the hot air at temperatures between 40 and 60°C in a chamber underneath, in which the produce has been placed on trays. The size of the system is based on the weight of the agricultural produce and a rule of thumb: one 2.5 m² air collector for 30 kg of agricultural products.
Captasol offers to place several collectors in a row to form a large system and create a so-called drying tunnel with 20, 30 or 40 dryers linked together. One of the advantages of Captasol’s air drying system is that it can work either connected to the grid or equipped with a PV module plus a DC converter. The latter can supply electricity to the ventilators of the solar air-heating units and allow the system to work completely off-grid during sunshine hours.
Dehydrated products worth ten times the price of fresh ones
According to Salvador Steffani, Head of Captasol, the company produced some 8,000 m² of hot-air collectors in 2013 alone, meaning around 2,500 collector elements of 2.5 m² each. The investment in a basic 30-kg solution amounts to around USD 3,000, which may look like a hefty price tag to a small family business. But Steffani believes that if the system is used intensively, the payback period could even go below one year. “It will depend on the type of produce and the end user, but drying products such as Nopal, also known as prickly pear, or other fruits multiplies the price by ten or more. It can be a really profitable investment.” Steffani says that this sort of device is helping many remotely located lower-income families to improve efficiency and set up their own agribusiness. “This device can lower the poverty rates in deprived areas. We are currently asking the government for support or an incentive for these products, but we have not been successful yet.”
Steffani has interesting growth plans for the near future: “We are negotiating with companies in some other industries, such as automotive, shoe manufacturing and leather products, about the inclusion of very large solar drying tunnels comprising around 500 collectors,” Steffani says. “It is a hard task, since engineering needs to be extremely accurate, but we are pretty certain that the industry is interested in our solution. We expect to finalise the first contracts in 2015.” In 2013, the hot-air dryer business represented some 15% of the entire solar thermal business in Captasol.
More information:
http://www.solex-captasol.com