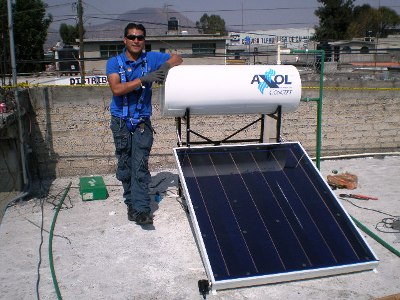 The new labour standards for solar thermal technology installers approved in Mexico in 2014 seem to have borne fruit. According to Daniel García, President of the renewable energy industry association FAMERAC, some 400 installers have so far been certified for the installation of thermosiphon systems under the new measure, which aims to improve the quality and reliability of newly installed solar thermal systems across the country. Another 1,000 installers are expected to gain certification this year. The photo shows a trainee on the roof of the national renewable energy training centre, CENCER, in Mexico City, after he completed the test installation.
Photo: CENCER
Last year, the Energy Secretariat, SENER, approved two new standards to provide solar thermal installers with training and capacity building. The first standard, Estándar de Competencia EC0325 (translated as Training Standard), aims at training installers of thermosiphon systems (mostly at residential buildings) and was approved in 2013, although it did not come into force until May 2014 (see the attached document). The second training standard, EC0473, for forced circulation systems with a separate tank is rather focused on the installation of industrial and medium-sized systems (see the attached document). This standard entered into force last August, and there have not been any installers trained based on EC0473, because the first courses have not been carried out yet.
Three-day course plus theory test and installation on-site
The first standard, EC0325, stipulates a three-day course plus an evaluation exam, during which all applicants must pass a theory and a technical test, the latter by installing a system on-site. The courses are offered in eight centres located all across the country and associated with the federal CENCER training institution. Currently, a training course costs around Mexican Peso (MXN) 3,000 (about EUR 180) and is supposed to be paid for by the head of the installation company in case of employees working under federal incentive programme Hipoteca Verde (Green Mortgage Programme).
García, who also chairs the Committee on Labor Competency at SENER, explains that training has been partly subsidised by the German Agency for International Cooperation, GIZ. “Without their help and subsidy, the cost of each course would have risen to around MXN 8,700,” García says.
Training should be compulsory for all publicly funded programmes
García believes that this year, another 1,000 installers will receive certification for the two standards – 500 for EC0325 and 500 for EC0473. But the overall impact of the measure is still limited: “With 1,000 certified installers, we only reach around 10 % of the overall number of workers in the country.” The president explains that the standard has been mandatory for federal programmes, whereas regional or local programmes have not been enforcing the regulation: “Our aim is to make the training compulsory for all publicly funded programmes this year. We are pushing hard to achieve that, seeking a better quality of the installed equipment.” He adds that “better quality means greater trust in the technology and a future improvement in Mexican solar thermal market figures.”
Although there are no official figures, García estimates a newly installed glazed and unglazed collector area in Mexico in 2014 of around 300,000 m², which means 11 % growth compared to the 270,000 m² installed in 2013. To calculate the share of glazed collectors in total market volume, FAMERAC’s president provides the following clues: “50 % of the total market volume is for residential buildings, 35 % for pool heating and 15 % for hotels and industry.” García assumes that pool-heating collectors are 95 % unglazed, whereas glazed ones make up 95 % in all other application areas (see the following table). This results in a total of 190,500 m² of newly installed glazed collector area in 2014.
More information:
http://www.cencer.org.mx
http://www.conocer.gob.mx
http://www.famerac.org
https://solarthermalworld.org/wp-content/uploads/2015/02/ec0325_training_standard_mexico_may_2014.pdf
https://solarthermalworld.org/wp-content/uploads/2015/02/ec0473_training_standard_mexico_august_2014.pdf