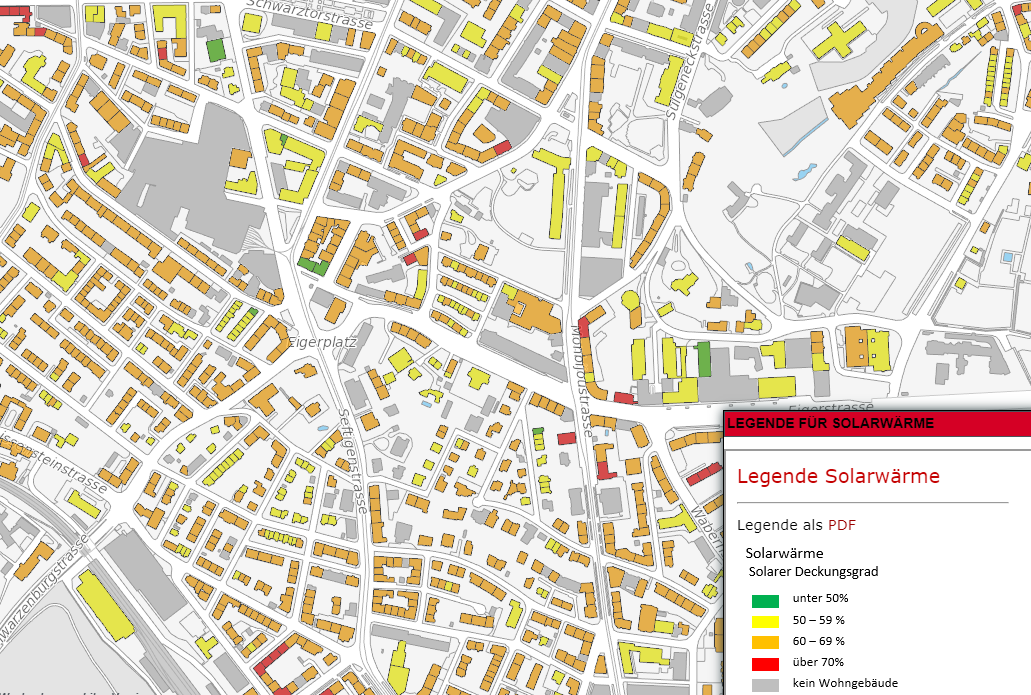 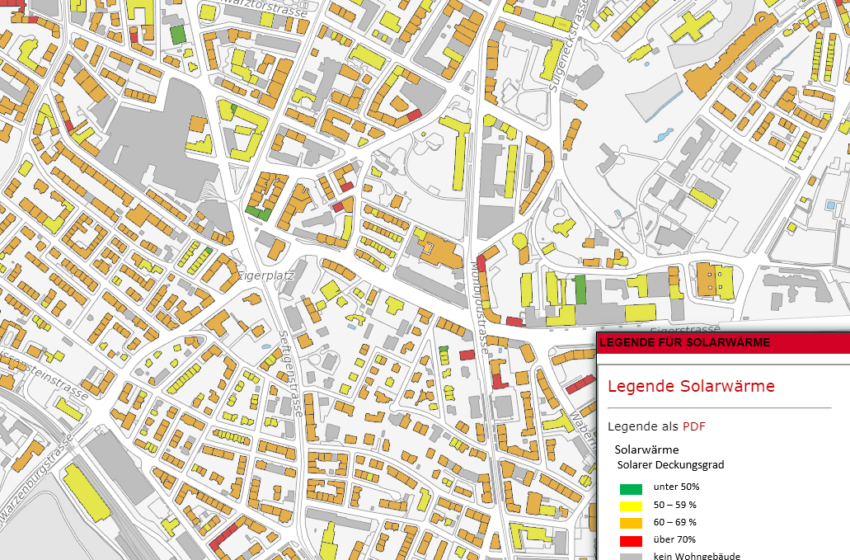 Municipalities play a major role in the transition to a clean energy economy. Bern, Switzerland‘s capital, is a good example of this. Since a narrow majority of 50.1 % of the voting population rejected an amendment to the Canton of Bern’s energy act in February 2019, the municipal council has approved a set of 22 measures to ensure that its energy and climate action strategy moves forward as planned. For example, it decided to accelerate the expansion of the district heating grid and promote solar thermal systems via heat maps. These maps indicate to building owners in the city whether or not solar thermal systems could be installed on top of their homes and how much of their hot water needs could be met by solar energy throughout the year (see screenshot).
Map: Solar Heat Map of the city of Bern
The canton government had proposed the February 2019 referendum to promote clean energy and align its targets with those set out in Switzerland’s 2050 energy strategy. However, the people opposing the amendment succeeded in mobilising their supporters by falsely claiming it would ban oil boilers, which would represent an excessive intrusion on private property rights.
The failed referendum pulled the carpet out from under the council’s feet, as the city no longer had a legal basis for the consistent implementation of its energy and climate action strategy, explained Martin Schmidt, Head of Energy Strategy for Bern. But despite the headwinds, the council followed through with the ambitious energy policy that it had specified in the Energie-Richtplan report published in November 2014.
Ambitious carbon reduction targets for the heating sector
Instead of burning fossil fuels such as oil and gas, 70 % of the heat needs to be produced from clean energy by 2035 compared to 2008 levels, according to Schmidt. This is an ambitious target, considering the proportion of clean heat came to 18.1 % at the end of 2017 (latest data available).
Renewable share in Bern’s heat consumption
Source: Office of Environment and Energy, Bern
In addition, energy efficiency measures are to be implemented to help lower heat demand from buildings by 20 %. Another important part of the energy strategy are the several maps that show what energy resources could be used by building owners to achieve municipal targets. Clicking on a house on one of these heat maps opens a popup window that recommends a renewable heat source, either district heat or a biomass boiler, and includes the following sentence: “Installing a solar thermal system will benefit the environment and reduce heating costs.”
There is also a special solar heat map, which uses colours to indicate what percentage of hot water demand can be met by solar thermal energy in individual homes. Red buildings allow solar fractions above 70 %, while green buildings have fractions below 50 %. Clicking on one of these buildings also opens a popup window, this time to state the number of residential units that the building contains, the maximum solar collector area that could be installed on its roof, the specific solar yield a solar thermal system could produce and the annual solar share this installation could provide.
Small but fast-growing solar heat contribution
Furthermore, based on the number of supported solar water heater systems, Bern’s Office of Environment and Energy (AfU) has estimated to what extent solar heat contributes to total heat production. From 2012 to 2017, the city’s eco-fund paid grants for 344 systems, while the canton’s support scheme has helped install another 259 systems since 2002. AfU assumed an average collector size of 15 m2 and an average annual solar yield of 450 kWh/m2 when estimating the contribution throughout the city. It came to 4,070 MWh in 2017, which corresponds to a share of as little as 0.2 %. However, it also emphasised that the solar heat contribution has increased by 286 % since 2008.
Open the heat map of Bern
Open the solar heat map of Bern