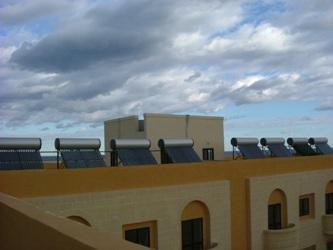 It is still unclear if there will be another subsidy scheme in Malta in 2013. The last phase of the solar water heater grant programme ended in November 2012. According to the Malta Energy Efficiency & Renewable Energies Association (M.E.E.R.E.A.), the funding for next year`s subsidy scheme was part of the state budget draft for 2013. This draft, however, has not met the parliament’s approval. As a result, the government will be suspended by 7 January 2013 and general elections will be held on 9 March 2013. According to the Malta Today newspaper, the opposition leader has announced that if he wins the general election, he will retain the 2013 budget and focus on the 2014 budget instead. The photo shows Malta’s largest domestic solar hot water installation in the housing estate of Pembroke Village. Eighty solar water heaters have been running here since 2005.
Photo: Charles Yousif

“The incentive scheme’s frame conditions have remained the same in the 2013 budget,” Charles Yousif, M.E.E.R.E.A.´s General Secretary, says. Households which buy a solar water heater receive 40 % of the investment costs (including installation), up to a maximum of EUR 400. The only condition: the homeowner must have never had a solar thermal system. The programme is financed through a EUR 0.02 tax on every litre of fuel used in transport and a EUR 5 surcharge on each ton of cement, as stated in the National Budget 2013 (see the link at the end of the text).

The former incentive programme started at the beginning of 2010 and was running over three years. Yousif estimates that the scheme helped install around 4,000 solar water heaters in 2010 and 2011. The programme’s administrator, the Malta Resources Authority (MRA), has not yet published any official statistics on the number of subsidised systems.

All in all, M.E.E.R.E.A. estimates show an increase in the number of solar water heaters in Malta to around 19,000 systems at the end of 2011. Hence, 15% of the 130,000 domestic households on Malta's islands use the sun to heat their domestic hot water, which translates into a renewable energy share of 0.4% of Malta’s final energy consumption for 2020. “It could have been more. But many homeowners have installed a photovoltaic system, because the grants were higher, given that these were financed by the EU’s ERDF funds to Malta,” analyses Yousif. He adds that on the other hand, it seemed unreasonable that the EU would introduce solar thermal systems in the EU RE Directive of 2009 (to contribute to the RE target), but not favour subsidising them. And this even though the systems are still quite unpopular in many EU countries – along with the costs they incur. Solar thermal is still far from being economically attractive to many potential users, Yousif claimed.

M.E.E.R.E.A was hoping that the 2013 budget could be extended, in order to promote hot water heat pumps, too. Almost 50% of Malta’s building stock is now comprised of flats with little roof space to install a solar heating system. Or, there are other technical difficulties, such as a required pipe length. As an alternative, the families in these flats could benefit from air-to-water or solar-assisted thermodynamic heat pumps with a COP of 3 or higher, rather than choosing the highly diffused electric boilers, which typically operate at a COP of 0.75.