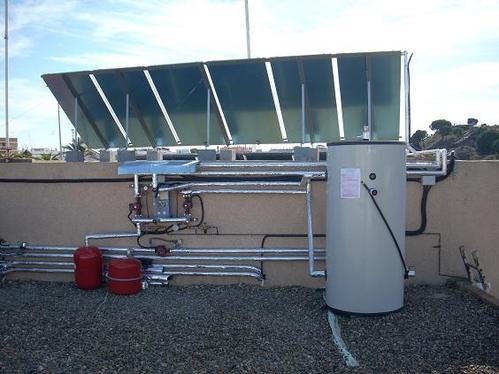 Recently, maintenance has gained popularity among Spanish solar thermal installers, according to the country’s national solar industry association, ASIT. Its general secretary, Pascual Polo, has been working to encourage the association’s members and end users to have solar thermal equipment undergo regular maintenance checks. Inspections carried out in Madrid and Barcelona have shown that the output of around one-third of the solar thermal systems installed in both municipalities based on the Technical Building Code, CTE, do not meet expectations (link to http://www.solarthermalworld.org/content/spain-solar-obligation-2006).
Photo: Solar del Valle
Spain was one of the fastest-growing European solar thermal markets during the construction boom between 2000 and 2010. For example, some 500,000 m2 of collector area was installed in 2008 alone. The economic crisis reduced the market to around 200,000 m2 in 2016. The main driver of new growth was CTE, a building regulation that requires the installation of solar thermal systems in new flats and public buildings to meet part of their energy demand.
However, while effective, the regulation has had an unfortunate side effect. According to industry sources, up to 30 % of the CTE-compliant solar thermal installations had been underperforming and some of them were not operational at all. Because there is no official statistic, Polo said that the estimate was based on the results from several inspections carried out by the Madrid and Barcelona municipalities.
There have been several reasons for the lack of performance. According to Polo, there was much demand during the first years of the boom, but there were few suitably experienced installers. Another reason was that the homeowners’ associations have done little to maintain the systems: “Some associations prefer not to pay maintenance and repairs, even if the amount is as small as EUR 20 per person.”
Raising awareness
Although the CTE stipulates that maintenance needs to be carried out, the regional administrations in charge of enforcing the rule have done little to ensure it is being adhered to. “Some regions have a stricter enforcement policy than others, but when an owners’ community decides not to contract an installer for maintenance, it is very difficult to prompt them to do so,” Polo explained. According to him, another reason might be that solar thermal installations did not carry the same risk as gas or diesel boilers, where operational failure would result in a cold flat.
“Many users of solar water heaters don’t realise that they can save between EUR 100 and 200 per household and year if their system is combined with a gas or oil boiler. Maintenance costs for a community heater are very small and after around 8 to 10 years, the system provides heat at no cost,” Polo said. His association is trying to spread the message among its members and among end users in order to promote proper maintenance. “The reality is that most installers are now much better prepared to offer maintenance services than they were ten years ago, and it’s an interesting market for them too. We’ve seen a clear improvement in this regard in recent years.”
New building regulations in sight
Now, the 11-year-old CTE is about to be reformed. Andrés Paredes, Solar Thermal Project Manager at the Institute for Energy Diversification and Saving, IDAE, said that the new draft for the technical regulations was currently under discussion. “It will include a simplified process for installing solar thermal, and some other renewable heating sources will be accepted too,” Paredes explained. There has been no statement about enforcing maintenance, but the sector expects some improvement. The new CTE is planned to be approved by the end of 2018. “We’re seeing a clear upward trend in the construction sector, so we expect the new CTE to contribute to growth in the solar thermal market over the coming years,” Polo said.
Websites of organisations mentioned in this article
http://www.asit-solar.com
http://www.idae.es