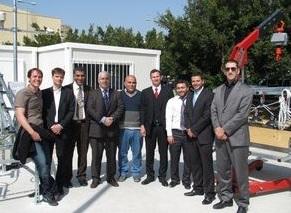 The overall objective of the IRI is to establish and secure consumer safety by protecting the Lebanese market from counterfeit or sub-standard products. The new test lab could help improve products further and may play an important role in future product and system innovations. The lab’s primary aim is to implement a test series according to the following European standards:

The facility has also been designed and set up in a way that IRI can apply for accreditation pursuant to DIN EN ISO/IEC 17025. The project costs were partially covered by funds from the Hellenic Aid programme. The project was jointly managed by the Greek Centre for Renewable Energy sources and Saving (CRES) and the United Nations Development Programme in Lebanon (UNDP). The test lab includes a sun-tracking test stand for thermal performance tests, a stand for testing the durability and reliability of solar collectors, another one for mechanical load tests and a meteorological station to monitor environmental conditions.

Presenting the test facility during a workshop in April 2011
Photo: IZES

Several institutions joined forces to set up the installation at the Industrial Research Institute (IRI):

At the IRI, engineers from both Lebanon and Germany worked together to acquire initial measurements with the data acquisition system, the installed sensors and the individual test rigs. Two collectors were also installed in April 2010 in order to underline the testing lab’s commitment to measuring under real conditions and to offer IRI employees training courses which would deal with real-life situations.

The text was written by Rani Al Achkar from the Lebanese Center for Energy Conservation (rani.alachkar@lcecp.org.lb) and Christian Schorn from the Institute for Future Energy Systems (schorn@izes.de).