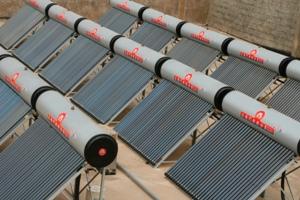 Lebanon’s National Energy Efficiency Action Plan (NEEAP) from 2011 to 2015 bears first fruits. The Lebanese Center for Energy Conservation (LCEC) has successfully implemented a prequalification scheme for solar water heater manufacturers and suppliers. The first prequalification round started at the end of 2010 and has already led to the qualification of more than 55 companies. The scheme enables SWH companies to benefit from the national subsidy programme, which offers SWH clients a USD 200 subsidy in addition to an interest-free loan.
Photo: LCEC

The prequalification questionnaire can be downloaded from the LCEC website and is open to all companies which meet the requirements. Qualification is based on two criteria, company performance and eligibility of the products offered for installation. The first list of qualified companies was issued in December 2010, with an acceptance rate of 78% among the 23 applications submitted. Since then, the list has been evaluated month for month. 15 new companies were added to the 5th version from September 2011. During the seventh evaluation in July 2012, only 2 out of 8 applications made it on the list.

While the subsidy itself is paid by the Ministry of Energy and Water, the Central Bank of Lebanon covers the loan’s interest rate. The latter is to support residential users, which were responsible for more than half of the newly installed collector area in 2009, according to the Lebanese Association for Energy Saving & for Environment, ALMEE.

The programme is part of the NEEAP, a national action plan adopted by the Ministry of Energy and Water in December 2010, as well as by the Council of Ministers in November 2011 (see the attached document). It established an efficiency roadmap in the energy sector, summarising energy efficiency measures and initiatives on around 50 pages. Among them is initiative 4: “Solar Water Heaters for Buildings and Institutions”. This initiative is promoting the use of solar water heaters mainly in the residential sector, to help install 190,000 m² of solar collectors by 2014. The current USD 200 scheme is planned to support altogether 7,500 solar water heaters for a sum of USD 1.5 million, plus offering 5-year loans with a zero interest rate.

The NEEAP initiatives’ other measures include: