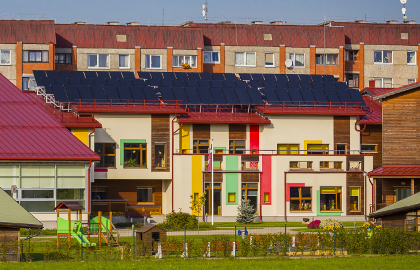 Representatives of eight leading solar thermal system suppliers and manufacturers in Latvia, as well as two associations met in December 2014 to establish the Latvian Association for Solar Collectors (Latvijas Saules Kolektoru Asociācija). “Our association has been registered with the proper authorities, and we have membership requests from four to five other companies,” Raivis Šķērstens, Chairman of the newly established association, confirmed in March 2015. Šķērstens heads Latvian solar thermal manufacturer Sun Investments, which offers solar systems under the brand name Selsol. The other founding members from the industry are solar thermal system importers Taupi, Altenergo, Solar M Pro, Erxsol, EG inzenieri, Zeze and Saules kolektors. The photo shows the 72 collectors on the roof of Vidzeme’s nursery school, which includes a swimming pool.
Photo: Taupi
According to Šķērstens, the objective of the new associations is lobbying for the use of solar thermal heat in Latvia and other Baltic states by offering seminars and other end user events. “Our members are very active in the field of solar thermal, and we would like to increase the share of solar energy in the overall energy mix of the Baltic states,” the chairman explains.
The association plans to organise training and awareness-raising events for various target groups, in order to inform the public about the advantages of solar collector use. In addition, it will promote the use of solar collectors in households, blocks of flats, government-run and private companies, as well as state and municipal buildings. “The idea was floated around for quite a while until Eduards Meļņikovs from Altenergo, Raivis Šķērstens and I came together and called upon the others,” explains Dainis Millersons, Head of solar system provider Taupi, which was founded in 2006. According to Millersons, Taupi operates in Latvia, Sweden and the neighbouring parts of Russia: “Since Latvia is a small country with a population of around 2 million, we are looking for opportunities elsewhere.”
Solar heat as the promotional focus of the new association
Some of the founding members also sell imported photovoltaic systems, but the focus of the newly founded association is clearly solar heat. “We have a renewable energy association in Latvia, but over the last two years, it was not very active. That´s why we founded this new association,” Šķērstens explains. The chairman confirms that he is the only flat plate collector manufacturer across the Baltic states. The company welds aluminium absorbers and assembles the collectors in its factory in Riga, the capital of Latvia.
Lack of solar thermal systems quality
Meļņikovs, board member of the association and Head of solar thermal system provider Altenergo, announced that the association was pushing for new standards for solar collectors in the country, as the quality of locally assembled and imported solar collector systems had significantly declined in recent years.
“Due to low quality, these systems do not work, whereas their designers are trying to put the blame on insufficient sunlight across the region. The real reason, however, is their own incompetence and mismanagement,” Meļņikovs said. He added that the obviously lower level of solar irradiation in Latvia made it even more important to ensure imports of high-quality collectors. The association has already called on the Latvian government to design standards and draft legislation based on European Union standards.
More information:
http://www.sauleskolektors.lv
http://www.selsol.lv/par-mums
http://www.altenergo.lv
Eugene Gerden is a freelance journalist based in Moscow and specialised in renewable energies (gerden.eug@googlemail.com).