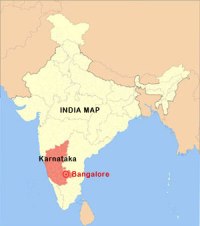 The Karnataka State Energy Department plans to set up at least 100,000 solar thermal roofs over the next five years, in order to become the number one in India in terms of renewable energy usage.
Photo: Wikipedia

The idea of a ‘100,000 roofs’ programme can be traced back to Germany, the second biggest solar thermal market in the world after China. Kalaikurchi Jairaj, principle secretary at the State Energy Department, said a policy is being implemented on the state level that guarantees reaching the target by 2013: “We had discussions with the Center for Study of Science, Technology and Policy (CSTEP) in the city of Bangalore, which is working in this direction,” says Jairaj. ”One part of the policy agenda includes the implementation of the already approved solar bye-law in the state”. In Karnataka, solar thermal systems are mandatory for new houses that require a permanent electricity connection. According to Jairaj, the policy will also include a campaign to spread the knowledge of solar technology among the masses and plans to subsidise early applicants for solar systems.

Some may remember that the Bangalore Electricity Supply Company (BESCOM), a utility of the city of Bangalore, had already made solar system installations mandatory for all new households that are built on an area of 600 ft2 (56 m2) or more. The utility denies access to the electricity grid if a household does not install a solar water heater. The alternative would be to choose a temporary electricity connection, with which one may evade the mandatory use of solar water heaters, but double the costs, since electricity tariffs for temporary connections are nearly twice has high as normal electricity tariffs.

Even though this order had been passed in September 2008, the utility strictly adhered to the requirement only from April 2009 on. Engineers of BESCOM would face suspension if they were to break the rules. The threat of suspension has virtually stopped BESCOM engineers from processing requests for electrical connections, leaving applications to pile up in large numbers.

Considering the high capital investment for solar thermal systems, some household owners opted for temporary connections despite the fact that the tariff for power has been more than twice as high. Tyamagundlu Ananth, president of the Karnataka Solar Manufacturers’ Association (KASMA), attributed this reaction by home owners to a sheer lack of knowledge, because solar water heaters are more than economical compared to electrical heating. As per KASMA, the investment of a solar water heater with a loan of 2 % interest rate per year pays back within 3 years due to the electricity saved during the same period.