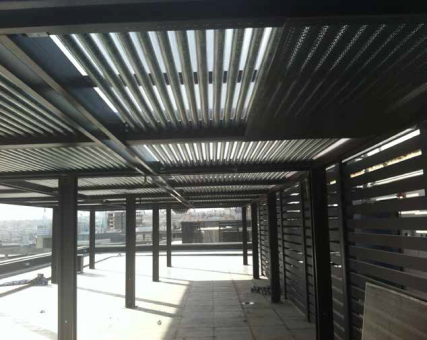 Since April 2013, Jordan has had a solar bylaw in place. The rules of the bylaw were stipulated in Article 10 of Law No. 73, which had already entered into force in 2012. Solar water heaters are a mandatory requirement for every new multi-family building with more than 150 m² of living space, for every new office building exceeding 100 m² of floor space, as well as each new public building with more than 250 m². There are, however, no additional regulations regarding quality standards or system sizes. Solarthermalworld.org spoke with Angelika Cerny, International Sales Coordinator at Jordan-based solar thermal turnkey-solution provider Millennium Energy Industries (MEI), about the effectiveness of the bylaw and the market development in Jordan. The photo shows an 80 m2 vacuum tube collector field which was set up in 2013 as a pergola for the office building of Jordan company EDGO Ventures in Amman.
Photo: Millennium Solar Energy

Solarthermalworld.org: Which impact has the solar bylaw had on Jordan’s solar thermal market?
Cerny: So far, we have only installed a few projects based on the bylaw. The solar obligation has not really increased MEI’s sales volume. The problem is that adherence to the rules is not really checked upon and the follow-up by the government agency is not as demanding as we hoped. Theoretically, it would be enough to place a single solar water heater on the roof of a multi-family building in order to fulfil the solar obligation. Several national stakeholders and international agencies have jointly called for the approval of additional technical requirements which guarantee quality standards, as well as certain sizes for the stipulated solar water heating systems. But it takes time to pass new guidelines or decrees in Jordan. As the situation looks right now, the solar bylaw is not going to have a strong impact on the market.
Solarthermalworld.org: MEI is focused on commercial applications. How does solar thermal technology fare among hotels or the industry in Jordan?
Cerny: We have been successful in the hotel segment over the past ten years: Almost 95 % of the international hotel chains along the Dead Sea coast are now using solar thermal technology, among them well-known brands such as Marriott, Mövenpick, Kempinski, Hilton and Holiday Inn. Under ideal circumstances, the hotel installations will have a payback period of 3 to 5 years and the hotels can save from the very first day on because instalments are below monthly savings. These kinds of installations are part of a purely commercial venture, without subsidies and independent from the solar bylaw because it does not apply to existing buildings. We installed a couple of process heat installations for companies in Jordan and Palestine, among them a chocolate factory, a slaughterhouse and a pharmaceutical factory. Besides, we will set up our first hospital system in Amman in 2015.
Solarthermalworld.org: How did the solar thermal market develop in Jordan in 2013 and 2014?
Cerny: Demand in the commercial solar thermal market increased in Jordan in 2014. However, the retail market for small solar water heaters declined during the same period, also because private investors were more interested in using the feed-in tariff for solar electricity, which had entered into force at the beginning of 2014. We actually saw suppliers of solar water heaters closing down their business.
Solarthermalworld.org: How does MEI – with its clear focus on turnkey solar thermal systems – deal with Jordan’s focus on PV?
Cerny: We cannot ignore the trend towards PV and we have also started offering turnkey PV installations. In March 2014, we signed a power purchase agreement with the Ministry of Energy and Mineral Resources about setting up a 23 MWp plant in Ma’an, a city in the south of Jordan. Construction will start in the first quarter of 2015. Still, there are a lot of unanswered questions. It has not been clear yet whether the public grid can accept the expectedly large capacity of several hundred MW of PV power and if there will be room for small systems too. Additionally, the government already changed the tariff level in the past, which unsettled international investors.
The interview was carried out by Bärbel Epp
MEI key figures:
MEI is a turnkey-solution provider of commercial applications with a focus on Middle East countries. The company, which is headquartered in Jordan, uses collectors from Turkey, China or Austria, depending on the project. MEI employs 45 staff at five different offices. The company received the Energy Globe Award 2014 for the 25-MW solar heating project at the Princess Nora University for Women (PNUW) in Riyadh, Saudi Arabia.
http://millenniumenergy.co.uk/