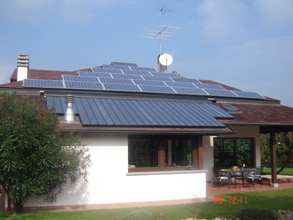 Photovoltaic and solar thermal systems competing for roof space in Italy’s residential sector: Solar electricity is booming, and the 55 % tax reduction for solar thermal installations was just extended for another 12 months. However, the conditions for it will not be as favourable as this year.
Photo: G.M.P. engineering

At the beginning of December, the Italian government announced to extend the 55 % tax reduction for residential solar thermal systems for another year. Otherwise, the tax reduction would have expired at the end of 2010. Together with the association of the heating industry, Assotermica, Italy’s solar thermal association Assolterm had approached the government in July 2010 in an open letter, which stressed the importance of the tax reduction for solar thermal market development in Italy. In 2010, the market fell flat, with a newly installed collector area of only 400,000 m2. The financial crisis and the photovoltaic boom pushed the solar thermal market away from the growth figures it had enjoyed earlier: Between 2006 and 2008, the market had still grown by 120 %.

However, the extension seems like a hollow victory, because the government also extended the period, in which 55 % of the investment costs can be deducted from the income tax, from 5 to 10 years. “Hence, under the new regulations, the annual savings will be rather small,” Riccardo Battisti explains. According to the Policy Advisor of Assolterm, it is difficult to predict market development in 2011.

Since the beginning of this year, Assolterm and Assotermica have worked closely together to establish a system to monitor market development. By now, 25 companies answer the questions of a survey carried out every three months. According to the statistics, the associations estimate a share of 87 % for flat plate collectors, and 13 % for vacuum tube collectors. The participating companies announced to have exported 15 % of their production output in 2010. Figures about collector imports are not part of the survey.