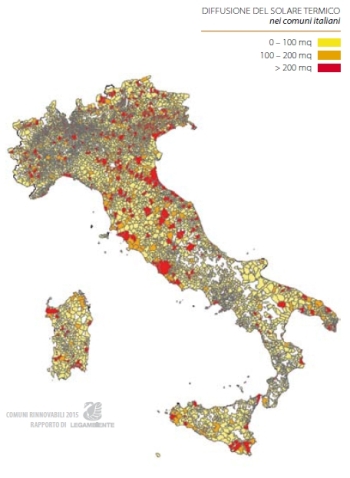 Legambiente, one of the major environmental associations in Italy, releases a report every year on the diffusion of renewables at local level, highlighting the role of municipalities and stressing their commitment, for instance, to renewable use in public buildings (see the attached document in Italian). For nine years, this report titled Renewable Municipalities (Comuni Rinnovabili in Italian) has shown maps, rankings and best-practice examples to illustrate the deployment of the different clean technologies: The current study, published in May 2015, listed 6,803 Italian municipalities with solar thermal installations from a total number of about 8,000 in 2014. This represents a huge increase from the 108 municipalities having solar water heating installed in their community in the first survey in 2005. The map displays the cumulated solar capacity at regional level at the end of 2014, with the red areas pointing to broad solar water heater usage.
Source: Legambiente
Smaller is better
Most of the solar thermal municipalities (4,473 of 6,803) are little towns with less than 5,000 inhabitants. The pole position is occupied by the small municipality of Seneghe (about 1,800 people) on the island of Sardinia, with 3,661 m² of solar thermal plants and a remarkable average of 1,995 m² per 1,000 inhabitants. Second place goes to Fluminimaggiore, a small town in Sicily, which got to 1,316 m² per 1,000 inhabitants. A good third position was achieved by Liguria region’s San Lorenzo al Mare, the first municipality in the north of the country, with 1,301 m² per 1,000 inhabitants. Despite these high-grade examples, a broader view on overall installed capacity shows that unfortunately, only 84 municipalities have been above the European solar thermal benchmark of 264 m² per 1,000 inhabitants. Hence, the national average is still very low, about 60 m² per inhabitant.
Cross-checked questionnaires
The report’s authors employ different data collection methods: First of all, Legambiente sends out a detailed questionnaire to all Italian municipalities and then cross-checks the answers received with data available by local bodies, such as regions and provinces, as well as with market studies by industry associations and Gestore dei Servizi Energetici, the state-owned company in charge of managing almost all renewable incentives schemes. The best municipalities in Italy take part in the RES Champions League, the renewable and energy efficiency competition at European level. The study Renewable Municipalities is a mostly internally funded project of Legambiente, which is financially supported by selected industry partners – this year, the funding partner is Asja Ambiente Italia, a group of companies developing micro-cogeneration units. Legambiente has more than 115,000 members, about 1,000 local groups and is responsible for managing 60 natural reserves in Italy. Additionally, 30,000 school classes participate in the association’s environmental education programme each year and 3,000 young people take part in its voluntary work camps.
Large cities play their part too
Of course, when focusing on the absolute diffusion of solar thermal instead of specific solar capacity per inhabitant, large municipalities show the highest figures. Perugia, the capital of the Umbria region, shows total installation figures of 8,966 m², followed by Bolzano with 5,445 m² and Rome with 5,023 m².
An interesting outcome of the study is that the majority of the installations have been registered in the central and northern regions, in spite of the much higher irradiation potential in the south. In 556 municipalities, solar thermal is used at different public premises, primarily schools, offices and gyms for a total of about 50,000 m², with 10 % growth compared to 2013. In this specific ranking, Milan shows the highest figure with more than 1,500 m² installed on municipality buildings, followed by Rome and Catania.
More information:
http://www.legambiente.it
https://solarthermalworld.org/wp-content/uploads/2015/06/renewable_municipalities_italy_2014.pdf