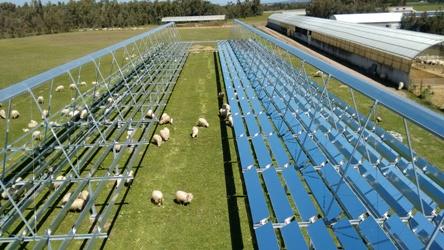 Direct steam production, 50,000 litres of diesel saved per year and the advantage of the Italian incentive scheme for renewable heat: All these favourable conditions allowed a small dairy in Sardinia to choose a concentrated solar thermal plant with Fresnel collectors for generating 200 °C steam. The steam is used to supply heat to the industrial processes for cheese production. The investment of EUR 400,000 will have a payback period of about 4 years.
Source: CSP-F Solar
Italian cheese, especially when produced in small and medium dairies in certain areas, is quite well-known all over the world and Sardinia is without a doubt one of these famous regions for cheese production. The cheese has an even higher quality when its production process addresses environmental concerns, for instance, by using a large share of renewables in industrial energy supply.
In the small town of San Nicolò d’Arcidano, in the Oristano Province, the family-owned Nuova Sarda Industria Casearia dairy has been producing organic cheese since 1936. As stated on the company´s website, Nuova Sarda – “believing in a better future” – has invested in renewables by installing a photovoltaic plant in 2010, “trusting in the further development of renewable energy”.
The “further development” is the part where solar thermal comes in. After four months of planning, design, and installation, a concentrating solar thermal plant was brought into operation at the end of May 2015, with the goal of providing eco-steam for the heat requirements of the dairy’s production processes. The plant has been added so recently that, unfortunately, a Google Earth view of the company premises will only show the photovoltaic installation.
Mirrors, mirrors

Nuova Sarda decided on Fresnel technology from Italian company CSP-F for its solar thermal installation. The product consists of solar concentrating modules with a non-evacuated receiver and a field of 10 mirrors with a total gross mirror surface of 29 m² for each module. The solar thermal system for the cheese factory consists of 34 modules and the installed peak power is 470 kWth. The heat transfer fluid in the receiver tube is water, which evaporates by concentrated solar radiation and can then be used to supply steam to the heat distribution system of the factory. The steam production has been estimated at about 800 tonnes per year with a peak of 600 kg/h. It reaches a temperature of 200 °C and a pressure of 12 bar, resulting in a solar fraction of 35 % and saving about 50,000 litres of diesel oil per year.

Technical description of the installation at Nuova Sarda
Short payback period
As the company pays about 0.7 EUR/litre of conventional fuel, the solar-assisted production allows to save about EUR 35,000 per year. Overall investment costs were about EUR 400,000. Since the gross mirror area of 995 m² is below the subsidy programme cap of 1,000 m², the plant profits from Conto Termico. The incentive corresponds to 72 EUR/m² year over a period of 5 years, meaning the total amount over five years would be EUR 358,200. Still, the support scheme does not permit incentives to exceed 65 % of the investment costs, which means that the grant will be limited to EUR 260,000. Hence, the net investment is EUR 140,000 and thanks to the above calculated savings, it should pay back in about 4 years.
CSP-F is an Italian company belonging to the Fabbrica Energie Rinnovabili Alternative Group, which has been setting up plants for the production and sale of renewable energy since 2001. CSP-F operated a pilot Fresnel process heat plant between 2010 and 2014 before they started delivering turnkey solar concentrating solutions. According to the company´s website, this “long testing period aimed at building a supply chain entirely based in Italy.” Dr Paolo Fazzino, Business Area Manager of CSP-F, confirms that the company does not manufacture components directly, but entrusts subcontractors with it, preferably near the installation site. Receiver tubes are bought on the market.
More information:
http://www.cspfsolar.it
Dr Paolo Fazzino (p.fazzino@cspfsolar.it)