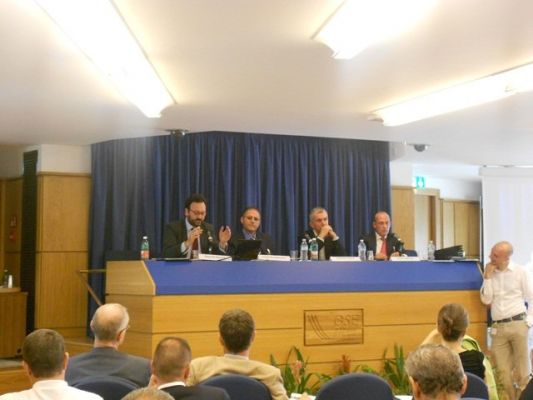 On 28 June, Italy’s solar thermal association, Assolterm, organised a round-table discussion under the title “How will the solar thermal market look like in 2030? Action Plan, burden sharing and incentive mechanisms”. Among the attendees were representatives of ministries, associations and research institutes. The debate, moderated by Maurizio Melis, journalist of Radio 24, focused on all the key issues of the Italian solar thermal market. Assolterm initiated the panel discussion in order to analyse the significant decline of the market in 2011. It reached only 273 MWth of newly installed capacity (390,000 m2) – a minus of 20 %.
Photo: Assolterm

The current trend required some careful reflection on what contributed to the downwards spiral and how to achieve a turnaround in sales figures. The discussion showed that the negative development has not only been due to the economic crisis, but has been getting worse especially because of an inadequate, unpredictable and unreliable legislative framework.

As for the incentives, the Ministry of Industry has recently written a new draft on the implementation decree for the feed-in tariff. Assolterm used the panel discussion to assess it. “Compared to the previous draft, this one shows some positive developments. First of all, the incentive addresses both the public and the private sector. Also, the period in which the subsidy is paid is brief enough: 2 years for collector fields of up to 50 m², and 5 years for collector fields above 50 m2 and up to 700 m²,” says Sergio D’Alessandris, President of Assolterm. Concerning everything else, Assolterm is still disappointed. “The subsidies are low and result in a rebate of only 25% to 35% of the investment costs: This is not enough. We expect the incentive scheme to repay at least 50 to 55% of the investment costs,” explains D`Alessandris.

Assolterm noted that the decree did not evaluate the benefits of solar thermal technology as carefully as it should have. In fact, 85% of the products on the Italian market are “made in Europe” and 35% are “made in Italy”. The supply chain itself creates wealth and jobs at the local level. With regard to the solar heating and cooling market, the President of European Solar Thermal Industry Federation (ESTIF), Robin Welling, also had something to add. “The technology is there and it is mature enough,” Welling says, “but it must become simpler. Currently, the only standard configuration is the system for producing DHW with cost reductions of up to 40%. The problem is that this reduction will still not reach the end user.” “It is essential to lower costs across the supply chain. The competition between ST and PV is about costs and the greater simplicity of PV.” According to Welling, costs do need to be reduced in the future. “We must be able to ask the government for subsidies which decrease over time because of price reductions.”

Another concern, however, is also running deep among solar thermal companies. The “Decree on Growth” (Law 83/2012), which was published just two days before the panel discussion, increased the tax deduction for building renovations from 36 to 50% – a very simple measure aimed at helping the currently struggling construction industry. Until June 2013, there will be two kinds of tax deductions in the private housing sector. The first is at 50% and relates to building renovations in general. The second, a 55% deduction, is for energy efficiency measures in existing buildings. It will be lowered to 50% next year. What Assolterm fears is that Italian homeowners will just use the new easy-to-apply building renovation tax deduction of 50 % to install a new gas boiler or an electric boiler and forget about efficiency measures altogether. Giampaolo Valentini of the Italian National Agency for New Technologies, Energy and Sustainable Economic Development (ENEA) agrees, saying: “We will lose the ability to focus on quality and energy efficiency and to monitor and map the results in terms of energy savings, as required by European directives.”

Sebastiano Serra from the Ministry of Environment said that they considered renewable heat a very important technology, because it is less expensive and more efficient. Implementing the feed-in tariff would prove how important the technology was. “We have not yet reached an agreement on the new draft with the Ministry of Industry. Our interest lies in introducing simpler elements into it,” says Serra.

At the conference, Assolterm presented a paper on the new obligation from May 2012, which requires covering 20% of the demand for domestic hot water, as well as heating and cooling in new buildings by renewable sources (see the table above). Depending on the building’s location, 6, 4 or 3 m2 of collector area can be enough to fulfil the obligation for a single-family-house (100 m2 of living space). This obligation is an addition to the mandatory requirement already in place, which requires homeowners to cover 50% of their domestic hot water needs by renewable energy sources.