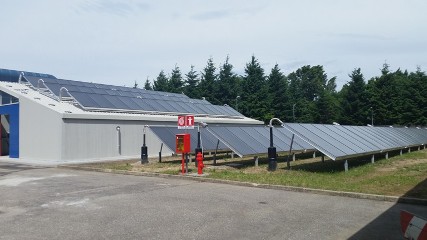 Finally, solar district heating has reached Italy too: Utility Varese Risorse, which is part of the environmental multi-utility group A2A, brought its solar thermal plant into operation on 19 May. The idea for this project, which also came about thanks to support from Intelligent Energy Europe project SDHplus, was from 2013 when the utility began to show interest in using solar to lower the natural gas consumption of its district heating grid in summer. Staff members of Varese Risorse took part in the SDHplus training course and benefitted from initial feasibility calculations for the solar plant. The collector field of 990 m² has been set up across eight collector rows, seven of which were mounted onto the ground, and one onto the roof of a small technical building, which also houses the heat exchanger and the control unit (see photo).
Photo: Riccardo Battisti
The solar thermal system was developed and installed by newly established Italian company SDH Energy, which was founded by former Sonnenkraft Italy staff to become the distributor for Arcon-Sunmark in Italy. The solar field consists of 73 flat plate collectors, type HT-HEATBoost35/10, which were produced by Danish company Arcon-Sunmark and have a gross surface area of 13.6 m² each. The Varese city grid, which is heated by a 5 MWel gas turbine and five backup natural gas boilers offering a total capacity of 35 MWth, has a length of 16 km and supplies thermal energy for domestic hot water and space heating to 150 large consumers. The grid operates with a supply temperature of 90 °C and a return temperature of 65 °C.
The solar thermal plant provides heat to already existing water storage systems with volumes of 215 m3. To try and obtain a lower average working temperature for the solar collectors, however, the solar circuit can also pre-heat the cold water which is needed to restore water losses in the grid and which is taken from public water supply at 10 °C.
Smart control to avoid stagnation
The solar plant operates dangerously close to the stagnation point during high irradiation because of the grid’s high supply temperature. The special circumstances required a system to control the pumps in the solar circuit based on irradiation and supply temperatures in order to avoid stagnation.
Key economic figures of the solar district heating plant of Varese Risorse, Italy. The figures include the 65 % subsidy on investment costs and have been calculated using a loan interest rate of 6 %, a 20-year useful plant life and O&M costs with pump and control system electricity consumption of less than 2 EUR/MWh of the delivered solar heat.
Source: Varese Risorse
Varese Risorse estimates a solar yield before storage of about 450 MWh/year, with irradiance at 1,438 kWh/m²a. This adds up to less than 1 % of the annual heating demand of the Varese grid. The EUR 420,000 investment can benefit from the Italian national subsidy scheme, conto termico, which should provide EUR 55,000 per year over a period of 5 years. The maximum eligible collector area of conto termico is 1,000 m², which is why system size was fixed to 990 m². The economic calculations of Varese Risorse result in an Internal Rate of Return (IRR) of 8.4 % and a payback period of nine years.
Although the solar fraction is lower than 1 %, this first solar district heating plant in Italy can serve as a milestone for spreading this technology in southern Europe.
More information:
http://www.solar-district-heating.eu
http://www.vareserisorse.it
http://www.sdhenergy.com
http://www.youtube.com/watch?v=UaCaL7xx5cU&feature=share (video showing the installation works)