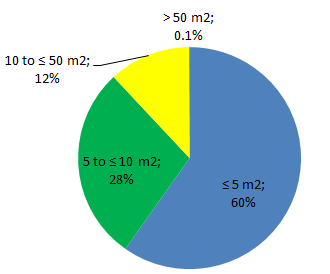 The administrator of Italy’s national subsidy scheme Conto Termico, Gestore dei Servizi Energetici (GSE), counted 9,658 applications over the first 18 months, among them 7,720 which reached the contract phase before the end of 2014. According to a recent GSE study called Performance Report on Conto Termico, solar water heating systems have been the technology of choice for 71 % of the approved applications, followed by biomass boilers with 24.5 %, although the gap between solar thermal and biomass stands wider in the southern regions of Italy (see attached document in Italian). The majority of subsidised solar water heaters have a size below 5 m² of collector area, as can be seen on the chart to the right, which shows all 5,443 approved solar applications. There are only 5 systems above 50 m² among the approved applications.
Figure: GSE
The GSE study was based on data from June 2013 to December 2014. The 5,443 solar thermal systems supported by Conto Termico amount to a total investment of EUR 25 million and subsidies of EUR 13 million. Average system costs add up to EUR 4,613 and the corresponding average incentive is EUR 2,350 per installation. Average specific costs are at 656 EUR/m², meaning that the incentive for any plant smaller than 50 m² equals 340 EUR/m² over 2 years, i.e. has allowed applicants to cover more than half of their investment costs.
Programme resources still available
Only a rather small amount of the overall budget of EUR 900 million has been spent so far. Originally, there had been EUR 700 million allocated to private investors and EUR 200 million to public bodies. But 98.4 % of the approved applications have come from private entities, whereas only 1.6 % have been submitted by public entities (26 systems).
These findings make it clear that the support system has not been working as expected, despite subsidies covering more than 50 % of the investment costs. The main reason is the very complicated bureaucratic process which comes into play when applying for this incentive, especially if compared with the paper work for the tax reduction.
The authors of the study have been very careful in assessing this small share of budget spent. They only wrote that “clearly there is room for new measures and for strengthening the incentive scheme.” In addition, they have announced to come up with an “improved legislation to simplify the support scheme,” which solarthermalworld.org has already reported about.
Conto Termico accounts for less than 10 % of Italian market sales
The total solar thermal surface area installed thanks to the scheme is about 38,000 m². Assuming a constant distribution over time, Conto Termico has created an annual market of just 25,000 m², which is less than 10 % of the entire Italian market in 2014.
The GSE study also took a closer look at the types of collectors and system categories:
https://solarthermalworld.org/wp-content/uploads/2015/06/gse_study_contotermico_2013_2014.pdf