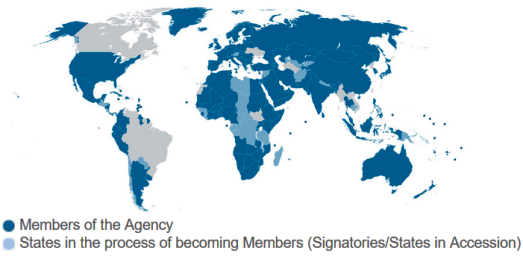 The International Renewable Energy Agency (IRENA) is a young, but globally operating intergovernmental organisation. The first general assembly was held only five years ago in April 2011, after a three-year preparation period. Since its founding, IRENA has welcomed 149 member states (see the map), and accession negotiations have been underway for another 27. Since 2014, the organisation has passed a biennial work programme, with the current one covering 2016-2017 (see the attached document). The projected budget for these two years is USD 89.5 million, split among six thematic areas and two administrative ones.
The 83-page Work Programme 2016-2017 published in January 2016 consists of three parts underpinned by IRENA’s three strategic areas of focus:
The middle part of the Work Programme describes the budget and targets across six thematic areas plus two administrative ones (see the table below).
Thematic areas of the IRENA Work Programme 2016-2017 and the projected budget (in thousand USD). IRENA’s annual core budget is defined as assessed contributions from each member state, which add up to USD 21.4 in 2016. The host countries, the United Arab Emirates and Germany, cover the office operating expenses, and there are voluntary contributions from other countries.
Source: Work Programme (attached)
Theoretically, all thematic areas should include a specific view on all types of renewable energy technologies. Within the field of “enabling investment and growth”, improved policies are especially needed in transport and the heating sector, as the programme document states that “the global and regional policy assessments will consider not only electricity, where most other regional studies on renewable energy tend to focus, but also transport and heating, where there is significant, under-reported potential for renewable energy and where improved policies could yield substantial benefits.“
Few clear-cut solar heating and cooling deliverables
The third part of the Work Programme contains a 40-page table listing all deliverables in the 6+2 fields. A clever reader may just search for the keywords “heating”, “industry”, “building” or “end-use sector” to identify any actions focusing on solar heating and cooling. But unfortunately, this kind of search shows only three entries:
Significant efforts required to integrate SHC into national energy statistics
However, the programme officers confirmed that it had been a conscious decision on behalf of the authors to include only a brief of all reports in the table, but also address the role of renewables in heating, industry and buildings. A few examples:
Under the REmap programme, IRENA continues to release more REmap country roadmaps, including for the Dominican Republic, India, Indonesia and South Africa. And then there is the planned release of a study on renewable energy for district heating and cooling in ten countries, scheduled for the end of the year. Further work will also entail an analysis of the role of renewable energies in cities, including heating and cooling, in preparation for the Habitat III Conference in Quito, Ecuador, in October 2016.
IRENA´s press department confirmed that it required “significant efforts to integrate national energy statistics for the heating and cooling sector into IRENA’s databases, amongst them the publically and freely available knowledge platform REsource”. And added: “Extending these datasets to solar heating and cooling is the natural next step, although data is scarce and not easily available in these sectors, especially for developing countries.” IRENA’s Knowledge, Policy and Finance Centre (KPFC) is managing REsource, which has so far listed renewable electricity data, for example, power capacity, investment trends or levelised costs of wind and PV electricity.
Websites of organisations and programmes mentioned in this article:
http://www.irena.org&nbsp;
http://resourceirena.irena.org/gateway/
http://www.irena.org/remap/&nbsp;
https://www.habitat3.org/
https://solarthermalworld.org/wp-content/uploads/2016/07/irena_work_programme_and_budget_2016_2017.pdf