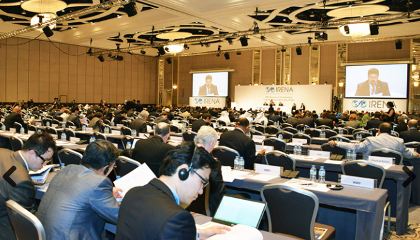 It was a busy Abu Dhabi Sustainability Week (ADSW) this January: It started with the fourth assembly of the International Renewable Energy Agency (IRENA), which brought together 1,200 high-profile attendants on 17 and 18 January 2015, and went on with the four-day World Future Energy Summit between 19 and 22 January, a summit that offered a renewable technology exhibition, as well as a series of conferences and debates on all technological and political issues regarding today’s renewable industries. The organisers expected around 32,000 visitors from 170 countries. “The next wave of disruptive changes is happening in energy,” Adnan Z. Amin, Director-General of IRENA, said during the FT IRENA Question Time Debate on 18 January 2015.
Photo: IRENA
“They speak about energy, but they mean electricity,” Stephan Fintelmann, CEO of German collector manufacturer KBB Kollektorbau, said. He visited the World Future Energy Summit and participated as a speaker in the session Technologies and Best Practices to Be Deployed Worldwide. “There were no more than a handful of solar heating and cooling technology exhibitors present at the Abu Dhabi National Exhibitions Centre.” Except for Fintelmann, there were also no distinguished solar thermal experts among the speakers of the four-day conference period. Additionally, some of the highlights of this year’s general assembly mentioned in the IRENA press release from 17 January 2015 only concerned renewable electricity.
280,000 people profit from USD 57 million funds for renewable off-grid projects
First example: The five renewable energy projects in developing countries that receive loans from the second round of the IRENA / Abu Dhabi Fund for Development Project Facility are entirely renewable off-grid electricity projects. It is the second of seven funding cycles and has a loan budget of USD 57 million. According to online information, projects must be “transformative, scalable and innovative so that the benefits extend beyond the single site.” In the second funding cycle loans will be granted for 35 MW of renewable energy capacity in photovoltaics, geothermal and hydropower reaching 280,000 people and businesses in Argentina, Cuba, Iran, Mauritania, St. Vincent and the Grenadines. There is no solar heating and cooling plant among these projects. But Timothy Hurst, Chief Communications Officer at IRENA, confirmed that “there are no specific renewable energy technology type constraints – on-grid or off-grid, electricity or heat, rural or urban – regarding support and financing through the IRENA/ADFD project facility.”
Online search engine for renewable market statistics excludes solar heating and cooling
Another highlight was the launch of the renewable energy statistics portal REsource. When the database is finished, it should provide country-specific information on the renewable energy market, its potential, policies, financing, costs, as well as education and training. The important thing is that the available data should be officially provided from the responsible governmental bodies, so that REsource has the same relevance as, for example, Eurostat has had in the European Union. This is why IRENA has developed a questionnaire to be sent out to the relevant bodies around the globe. The current version of the online tool does not yet include solar heating and cooling technology under subsection Renewable Energy Capacity. Clicking on solar energy in the drop-down menu of technologies will let you choose between solar photovoltaics and solar thermal, which means CSP here, as the methodology states that “solar energy is solar radiation exploited for electricity generation and hot water production. Solar capacity data includes solar photovoltaic and concentrated solar power.” Still, Hurst confirms that “we are working on expanding our data sets in the future.”
The section Renewable Energy Education in REsource contains only one category called Solar Energy, which even includes all three technologies: photovoltaics, CSP and solar heating and cooling. Only subsection Renewable Deployment shows figures for solar heating and cooling separately, whereas levelised costs have so far been listed for solar electricity only.
Today, IRENA has 137 member states plus the European Union, and an additional 33 countries are in the accession process and actively engaged, according to the 17 January press release. IRENA grew rapidly over only ten years. The starting point was the International Conference for Renewable Energies in Bonn in 2004, whose concluding resolution called for the establishment of the International Renewable Energy Agency. Five years later, the founding conference took place again in Bonn and was attended by representatives from 75 nations. Nowadays, IRENA employs over 100 staff in its headquarters in Abu Dhabi and 30 people at the Innovation and Technology Center in Bonn, Germany. The agency promotes the adaption and sustainable use of all forms of renewable energy, including bio-energy, geothermal, hydropower, ocean, solar and wind energy, on a global scale.
More information:
Loan Funding of IRENA and ADFD: http://adfd.irena.org/
IRENA: http://www.irena.org
World Future Energy Summit: http://www.worldfutureenergysummit.com/
REsource: http://irena.org/resource