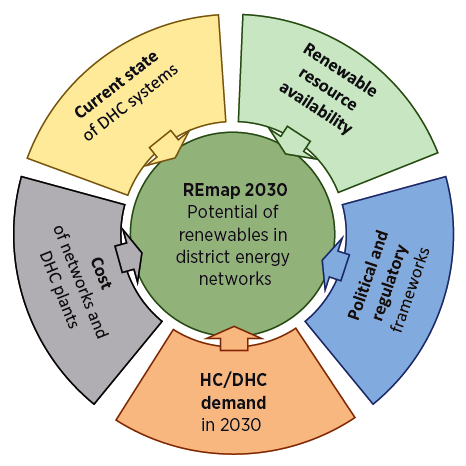 The International Renewable Energy Agency (IRENA) has published an industry roadmap for Renewable Energy in District Heating and Cooling (DHC) as part of its REmap 2030 project. This study analysed the current state of the DHC market in eleven countries – with a focus on district heating in seven and one on district cooling in the other four – and examined the long-term potential of the two technologies in these countries (see the attached PDF). The countries chosen for the study have distinctly different market environments. Two of them are Denmark and Switzerland, which have had the highest share of renewables in their energy supply (around 40 %); a third one is China, the largest market for DHC today, but one on which renewable energy has yet to play a role at all. The chart shows the key factors impacting the potential of renewable DHC. The aim of the renewable energy roadmap (REmap) programme is to show a path towards doubling the share of renewables in the global energy mix by 2030.
Chart: IRENA
The authors of the study say that only a few countries, namely Denmark, Sweden and Switzerland, have so far been promoting renewable-based district heating and have seen a significant renewable share in DHC. Provided that careful planning is done when renewable plants are set up in dense urban environments and that economies of scale are taken into account, their conclusion is that DHC is “generally seen as more cost-effective than decentralised space heating and cooling.” And: “Centralised generation in existing networks costs 41 % less than generation with new, decentralised capacity, analysis shows.” They also emphasise the benefits renewables can have for cities looking to expand their DHC networks, as operational parameters, such as the network temperature, can be set individually for each system. Both local and national policymakers need to be involved in the process. “While DHC systems may be integral to a country’s energy infrastructure, they are often operated at city level,” the roadmap summary reads.

The table below lists key facts about current and future district heating use as well as the role of renewable energies in selected countries. An evaluation of the long-term potential was done for 16 renewable technologies (including solar, natural water, geothermal and biofuels) and considered influencing factors such as technology costs, resource availability and land use. Throughout the report, the solar systems under discussion are solar thermal installations only; heat pumps powered by solar photovoltaic (PV) panels have not been part of the equation.

Key facts about current and future district heating use in selected countries and the role of renewable energies
Source: DHC Roadmap REmap 2030
The following list provides an overview of national solar district heating targets.
China: This key market could achieve a 24 % renewable share in district heat generation, divided equally between geothermal, bio energy and solar.
Denmark: The already high renewable share of 42 % could rise to 73 %. The northern European country will remain a global leader in large-scale solar systems, which can be expanded to meet 13 % of total district heat demand by 2030 and can be complemented by geothermal and bio energy systems.
Germany: Despite an overall decline in district heat demand across the country, new heating networks are expected to increase renewable energy capacity. REmap suggests a shift from bio energy towards geothermal (7 % of district heating) and solar heat (6 %).
Switzerland: High electricity and natural gas prices up to 2030 will create a favourable business climate for renewable energy. Biomass is expected to meet 27 % of total district heat demand. Geothermal and solar district heating could be expanded further, so that by 2030, their share in covering the total demand for district heating could increase to 17 % and 2 % respectively.
Websites of organisations and projects mentioned in this article:
http://www.irena.org
http://irena.org/remap/
https://solarthermalworld.org/wp-content/uploads/2017/04/remap-district_heating-cooling-fullreport-01.pdf