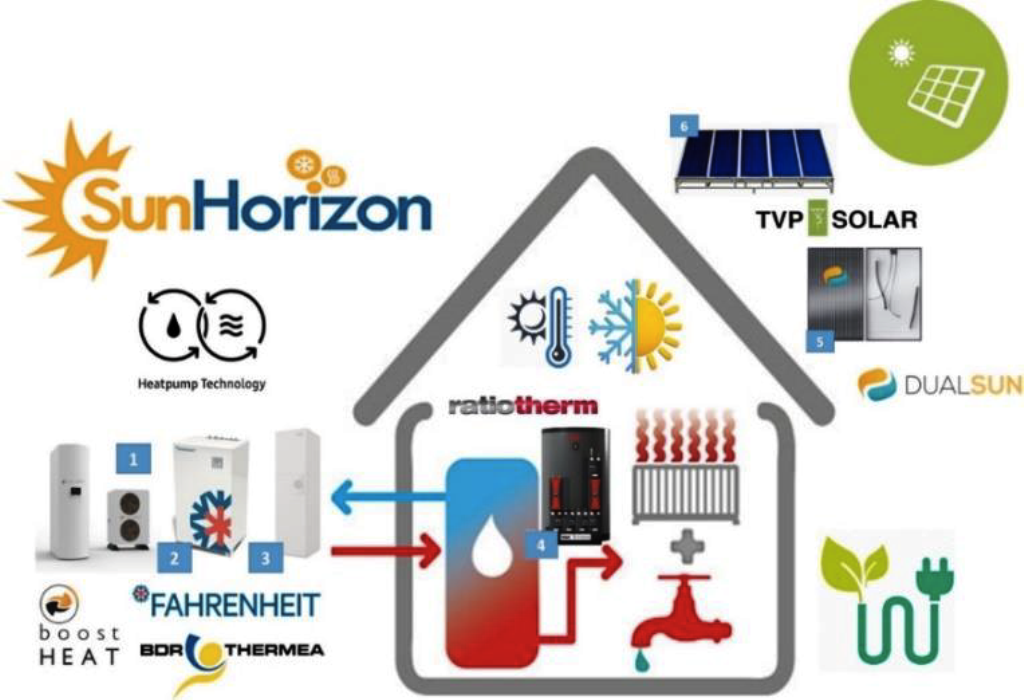 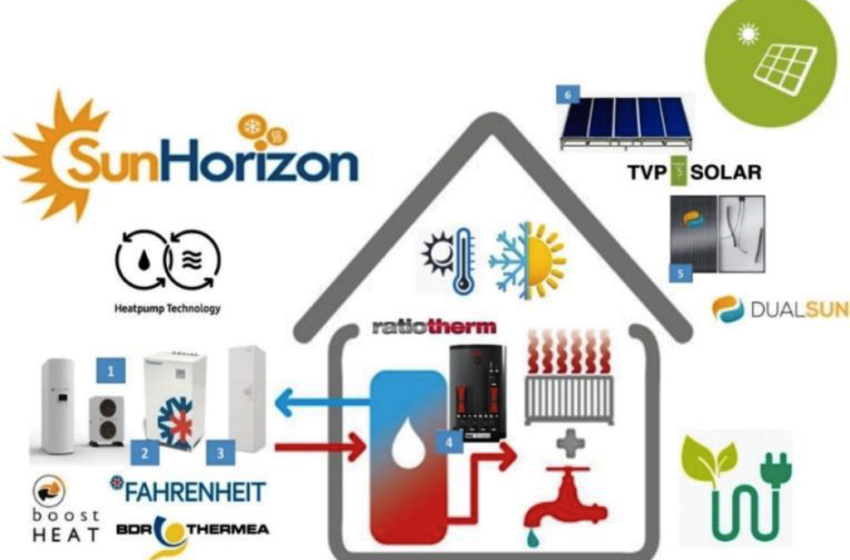 The principal objective of a recently launched, EU-funded project named SunHorizon is to optimise solar-assisted heat pump systems in residential and commercial buildings. The endeavour will demonstrate a wide variety of solutions for both technologies, such as thermal compression, adsorption and reversible operation regarding heat pumps and photovoltaic, thermal and PVT systems in the case of solar, at eight locations. It will also involve the creation of a cloud-based monitoring platform to develop enhanced, KPI-focused algorithms and tools to maximise solar yields and carry out predictive maintenance.
Image: SunHorizon project
SunHorizon is an industry-driven consortium comprising 21 partners and includes technology suppliers such as German chiller manufacturer Fahrenheit, French PVT equipment manufacturer Dualsun, French-based BoostHeat, which produces gas-fired thermal compression heat pumps, TVP Solar, an evacuated flat plate collector manufacturer headquartered in Switzerland, heating solutions provider BDR Thermea from the Netherlands and Ratiotherm Heizung + Solartechnik headquartered in Germany. Launched last October in Milan, Italy, the project is being coordinated by Italian-based RINA Consulting. It will run for four years and end in September 2022.
“One focus of SunHorizon under the lead of Schneider Electric Italy has been to develop a platform providing cloud-based monitoring. The project partners are currently sifting through data on demonstration site buildings, as well as solar and heat pump systems, to evaluate the most proper modelling approach to analyse the data,” explained David Chèze, a researcher who works at the Alternative Energies and Atomic Energy Commission (CEA) in France. He also participates in Task 60, titled Application of PVT Collectors, a research platform set up under the aegis of the IEA Solar Heating and Cooling programme. The SunHorizon project will add four additional case studies to the Task 60 database on operational systems. The cooperation also enables partners in the project to use and improve upon approaches shared in Task 60, such as those for assessing systems and buildings, testing PVT installations and evaluating key performance indicators.
Eight pilot systems up for testing
As part of SunHorizon, eight systems are to be designed, built and monitored to demonstrate different solar-heat pump configurations specified in the following and listed in brief in the table below:
The combination of solar thermal and photovoltaic via PVT modules will be tested at four of the eight sites, namely Nuremberg, Madrid, Verviers (at a swimming pool) and Riga.
List of pilot plants that are part of SunHorizon, a project funded by the EU’s Horizon 2020 research and innovation programme (grant agreement no. 818329)
Organisations mentioned in this article:
SunHorizon project (website under construction): http://www.sunhorizon-project.eu
IEA SHC Task 60: http://task60.iea-shc.org/