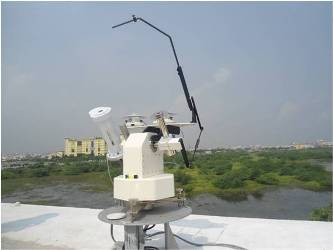 Until now, there has not been any reliable data on solar radiation levels in India. This is why developers of solar power and solar process heat installations usually refer to NASA and its satellite images when it comes to identifying the locations with the best solar radiation and to forecast the solar yield of a planned system. However, the US space agency’s radiation maps are not as adequate as they might seem to be. Developers of solar power plants have already observed differences between the actual power output and the forecast from satellite data. A new research project supported by the German development agency is now thought to fill the gap. Within the next two years, the SolMap project should be able to offer a solar map of India. The photo shows one of the monitoring stations of the Indian Centre for Wind Energy Technology (C-WET).
Photo: C-Wet

In association with the German Agency for International Cooperation (GIZ), the C-Wet will carry out a Solar Radiation Resource Assessment (SRRA). The first aim is to establish 51 Automatic Solar Radiation Monitoring Stations (ASRMS), which cover potential areas in the country and transmit data via GPRS to the Central Receiving Station (CRS) established at C-WET in the coastal town of Chennai (former Madras) in east India. According to the SolMap team, the map will identify solar top spots at which the sun’s radiation shows optimum intensity for power and heat generation, enabling developers to accurately pinpoint future project sites. SolMap also aims at establishing a calibration laboratory for solar radiation measuring equipment at C-WET.

The data gathered by the monitoring stations will be used to calculate the Global Horizontal Irradiance (GHI), the Direct Normal Incidence (DNI) and the Diffuse Horizontal Irradiance (DHI). Physical plausibility tests for secondary meteorological parameters (non-radiation values), such as air temperature, relative humidity, wind speed, barometric pressure, etc. will be updated monthly at each station.

As a result, project developers will be able to predict the plant’s output with reasonable accuracy. They can also make more informed choices about which solar technology – photovoltaics, solar thermal power or solar thermal heat – to use. Even a 5% gap in the measured data to satellite data can cause financial losses as huge as 20% of overall revenue, according to the SolMap team.