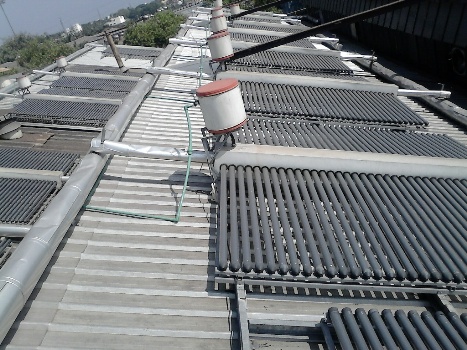 The Union Budget in India for 2016-17 – announced by the Finance Minister on 29 February 2016 – includes good and bad news for the solar thermal industry. On a positive note: The government has again increased the coal tax from Indian Rupee (INR) 200 to 400 per ton, after already doubling it in Finance Bill 2014-2015. The additional tax revenues will be used to support renewable energy technologies. The overall financial support for renewable energies will increase to INR 50.6 billion (EUR 725 million) during financial year 2016-17. Additionally, the customs duty on solar-tempered glass and solar glass was raised to 5 % besides a Special Additional Duty of 4 % to strengthen domestic manufacturing. On the downside, there is the increase of basic customs duty from 7.5 to 10 % under Harmonised System (HS) code 84191920.
Photo: Wheels India
The government took this step because it says “costlier imports provide a boost to domestic production”. The industry, however, isn´t backing the new requirement, since there are still other HS codes like 84199090 which would allow the import of solar water heater components and which are still subject to a mere 7.5 % basic customs duty. Components like vacuum tubes, tanks or pipes are imported as spare parts and later assembled either for residential or for industrial/commercial purposes. Hence, there has already been a visible shift, as no more imports have been reported under HS Code 84191920 since 1 March 2016 – meaning since the announcement was made.

Currently, components for solar water heaters and complete systems can be imported under various HS codes in HS code section 8419, which entails “machinery, plant or laboratory equipment, whether or not electrically heated (excluding furnaces and ovens), for the treatment of materials by a process involving a change of temperature such as heating, cooking, roasting, distilling, rectifying, sterilising, pasteurising, steaming, drying, evaporating, vaporising, condensing or cooling, other than machinery or plant of a kind used for domestic purposes; instantaneous or storage water heaters, non-electric” (see the attached PDF and the following table).

Different HS codes in section 8419 can be used for solar water heaters and complete systems in India. Countervailing duties are anti-subsidy duties, which are imposed under the World Trade Organisation rules.
Source: zauba.com
Members of the national industry body Solar Thermal Federation of India (STFI) had called on the government to create a separate HS code for complete solar water heater systems with high customs duty imposed in order to protect the local industry. But it seems the plea by the industry either has gone unheard or has been misinterpreted by the government.
In general, STFI agrees that vacuum tubes should have basic customs duty much lower than other components, since vacuum tubes are not manufactured in India. Vacuum tubes have been exempt from customs duty since 1 April 2015.
https://solarthermalworld.org/wp-content/uploads/2016/04/hs_codes_categorisation_india.pdf