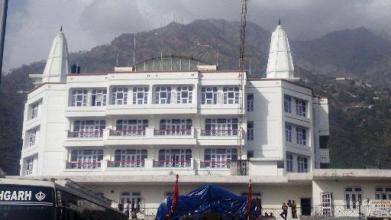 Since February 2012, a solar thermal installation has been operating successfully high up in the mountains in Jammu and Kashmir, the northernmost region of India bordering Pakistan. Up to an altitude of 1,700 metres, several different fields totalling 640 m² of collector area have been supplying solar-heated water to the ritual bath at Mata Vaishno Devi, one of the most popular Hindu shrines. The temple attracts close to 9 million pilgrims every year. All of them start hiking the 13 km to the cave temple area from the Katra base station (see photo above).
Photo: Jaideep Malaviya

Because the pilgrims who camp in dormitories take a ritual bath before offering their prayers, there is a high demand for hot water as the temple is situated in a colder region. Until now, the water was heated by electricity. Regular black-outs and a high electricity bill convinced the Shri Mata Vaishno Devi Shrine Board at the end of 2010 to invest into solar thermal technology. The board, which supervises the construction and development of the dormitories, had planned with the first solar water heater for the new dormitories in 2011. The site survey, however, showed such promising radiation results that it persuaded the board to order a total of four solar water heating systems. The 640 m² of flat plate collector area were split up as follows:

Clearly a challenging task: It took men and mules seven days to transport the material for this 60 m² solar thermal installation over 13 km from the Katra base station to the temple area at 1,700 m.
Photo: Jaideep Malaviya

“Installing the system at the dormitory complex near the shrine was a challenging task, as all the material had to be transported up to an altitude of 1,700 m with mules and men alone,” Surendra Kumar, Managing Director of Nuetech Solar, explains. “It took us nearly 7 days to lift the entire system the 13 km from the base station to the temple complex.” Nuetech is the solar water heater manufacturer which won the tender for the system’s installation. To ensure that hot water is available at all times, a 6 kW electric back-up heater has been set up for every 1,000 litres of capacity.

The investment into the four solar thermal systems added up to INR 6.1 million (approx. EUR 97,000, including collectors, tanks, mounting systems, installation and transport). The specific costs per m² collector area are 9,531 INR/m² (152 EUR/m²). The investment will pay back after just 6 months, because the installation was subsidised with 60 % of the total costs. This special subsidy rate has been offered by the Indian Ministry of New and Renewable Energy to support solar thermal installations in hilly areas and the Himalayan region.

The Shri Mata Vaishno Devi Shrine Board is satisfied with the project results and now considers installations at other ritual bathing sites used by pilgrims.