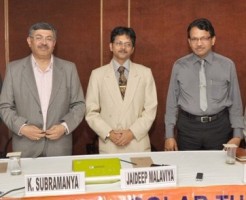 The members of the newly founded non-profit association STFI represent over 75 % of the market, making them a strong partner when dealing with the needs of the industry. The first president of STFI will be journalist and solar thermal expert Jaideep Malaviya. Krishnappa Subramanya, CEO of Tata-BP, and Hemant Revankar, Managing Director of Bipin Engineers, will be Chairman and Vice-Chairman, respectively.

The main reason for the industry’s “get-together” was the National Solar Mission, which set a target of 20 million m2 of newly installed collector area by 2022. ”STFI will develop an appropriate policy framework and a user-friendly financing mechanism to make this target a realistic one to achieve,” announced Chairman Subramanya. In reaching this objective, STFI plans to closely coordinate its efforts with the Ministry of New and Renewable Energy, the Ministry of Power, the Ministry of Urban Development and the Ministry of Rural Development.

Besides the aforementioned, the founding companies also defined the following areas STFI is thought to focus on:

For more information about the topic, please mail to info@stfi.org.in
The Federation’s website http://www.stfi.org.in is still under construction