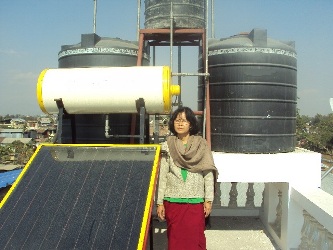 On 31 March 2014, the Ministry of New and Renewable Energy (MNRE) and the National Housing Bank (NHB) signed a Memorandum of Understanding (MoU) to provide subsidies for private households when they purchase solar water heating and solar lighting equipment. The beneficiaries can only receive funding for equipment approved by the MNRE. 30 % of the benchmark costs of solar thermal systems (40 % in Special Category States) are covered by the grant, as in the federal state programme of the National Solar Mission (see database of incentive programmes). The grant is capped at a maximum capacity of 500 litres per day and house. The NHB scheme will run until December 2015.
Photo: Malaviya Solar Energy Consultancy
The agreement has been well-received by the solar thermal industry, because the Channel Partners of the national Solar Mission subsidy scheme can now forward their clients’ applications to the NHB, reducing the financial burden of re-claiming capital subsidies from the MNRE. It represents a clear advantage over previous subsidy reimbursements, which used to take up to a year to be processed, putting a lot of pressure on the pre-financing capacities of solar thermal system suppliers.
The National Housing Bank was designated as a nodal agency and received a budget of INR 1.05 billion (approx. EUR 13 million) for administering and monitoring the capital subsidy scheme. However, the new model is slightly different for the end consumer. Under the National Solar Mission scheme, the customer gets the solar water heater at a reduced price from the supplier / channel partner, corresponding with the 30% benchmark costs. The NHB scheme offers the customer a loan from one of several eligible Primary Lending Institutions – with the interest rate depending on the institution – to finance the purchase of a solar water heater. This time, the lending institution reduces the principal loan amount by 30% of the benchmark costs. Beneficiaries will be notified that the solar units installed in their homes would be subject to inspection.
NHB cooperates with the following Primary Lending Institutions:
The MoU between the MNRE and the NHB is an exclusive arrangement and will not be influenced by the budget cuts which India’s Finance Minister, Shri Palaniappan Chidambaram, presented in February 2014 together with the interim budget for financial year 2014-15. The minister based his calculations on the Solar Mission disbursement of INR 4.26 billion between April 2013 and December 2014 and capped the budget for all three solar technologies at the same level for the current financial year. This means a significant reduction in funding compared to the first phase of the Solar Mission during financial years 2010-11, 2011-12 and 2012-13, with total funds of INR 17.58 billion – an average of INR 5.86 billion annually.
It remains fairly unclear how the budget cuts will influence subsidy scheme regulations for solar energy systems, because India is holding general elections at the moment. The newly elected government will most probably not take over before June 2014 and might then approve a new budget.